In the Battle of â€˜He Said, She Said,' Clinton Won 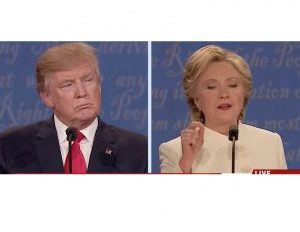 The idea of having three presidential debates is overkill. The only reason is to cover ground that has not been covered in the previous two debates. While there was fertile opportunity for this, considering the shallow content of the first two conversations, we learned nothing new. However, two truths were reinforced:

Clinton has shown herself to be an expert debater, effectively pivoting off of challenging questions and drawing Trump into drowning in his own defense. From emails, she pivoted to Russian espionage and Trump’s unnerving defense of Vladimir Putin. From her husband’s transgressions, she pivoted to Trump’s boasted attacks on women. On abortion, Clinton effectively defended a woman’s right to make decisions about her own health and that of her family; while Trump takes the most effective conservative message his campaign has and reduced it to an unnecessarily graphic visual that undermined its impact.

With each debate, Clinton got betterÂ and so did Trump. The difference is Clinton started at ground level while Trump began six feet under.

Entering this final debate, news reports and polling memos showed Clinton making major strides in battleground states and with key constituencies, and her confidence radiated off her Olivia Pope-style power suit. She jabbed him on using Chinese steel to build Trump Tower, using undocumented workers for the same, and goaded him into a back and forth on who is really a Putin puppet.

Most of these attacks were planned, but several were spontaneous and off schedule. By no coincidence, these are the very skills a practiced global negotiator would have at her disposal and also what one would expect from the president of the United States whether having it out with Congress or with aggressors the world over.

Presidential debates are more than simply hearing about a candidate’s five-point plan for fixing the economy or managing foreign policy. The events serve as a window into the character of an individual and how they perform under great pressure at the highest levels. Once again, Clinton proved to have the stamina to run and win the race, while Trump appeared to putter out after the first 45 minutes.

On foreign policy, it was clear which candidate is taking those intelligence briefings seriously and who is blowing them off. Trump continued to show himself as dangerous in his lack of understanding and flippant attitude concerning the proliferation of nuclear weapons. His flailing attacks on the U.S. strategy in Mosul confirmed a hollow understanding around the development and carrying out of strategic combat objectives. Ironically, political watchers noted those comments were his most effective of the night.

There were two final insults on the evening to our American democracy, one widely discussed and the other noted but not emphasized.

In a move Clinton referred to as “frightening,â€ Trump reversed himself from a previous debate and refused to say how he would respond to the outcome on Election Day. Using the moment as a reality TV cliffhanger, Trump said he would keep the nation in suspense as far as how he might respond. This is completely irresponsible and undermines our position as the democratic ideal throughout the world. Â Many believe this was the final straw for the few undecided voters left. Forthcoming poll results will reveal if that is true.

The final insult was the absence of a cordial handshake by the candidates at the end of the debate series. These two clearly don’t like each other, but they couldn’t even fake it. Trump deliberately waited behind his podium as Clinton greeted, and shook hands, with moderator Chris Wallace of FOX News. She then moved to greet members of the audience and her family. Trump begrudgingly shook Wallace’s hand and quickly left the stage.

On the points of poise, professionalism, civility and character, Clinton took Trump out completely in all three debates. He may have landed a few blows, but only just so, and certainly not enough to stop Clinton’s momentum in these final weeks. Trump needed to run the table, and a very long one at that, to change the electoral map in a way that gives him a shot. With that moment gone, all he can do now is run out the clock.

The debates are finally overÂ and in the battle of ‘he said, she said,’ Clinton won.