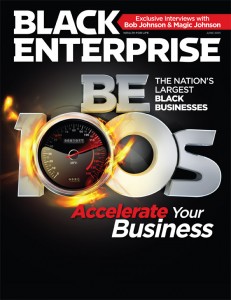 Get ready to take your company through a business environment that promises to be even more fast and furious, one in which each curve turns more treacherous and bad decisions can total your enterprise. In order to pass the finish line–whether the goal is increased market share, revenue growth, or a boost in profits–it will require entrepreneurs to maintain nerves and reflexes of a skilled Formula One driver.

This is not hyperbole. It ‘sÂ  the reason why we have presented our 41st Annual Report on Black Business under the theme “Accelerate Your Business,â€ which coincides with our recent Black Enterprise Entrepreneurs Conference. With a shifting economy that produced an annualized 2.4% expansion in the first quarter of 2013 after growing a mere 0.4% in the fourth quarter of 2012, chief executives that drive the BE 100s–the nation’s largest black businesses–are keenly aware they must continually retool their companies for growth.Â  Some have proven successful while others seek to gain their bearing as reflected in the spotty performance of these companies across sectors.

The companies that comprise our BE Industrial/Service companiesÂ  list produced revenues of $19.1 billion in 2012 versus $18.7 billion in 2011–a lackluster 2% spike. With Maryland Heights, Missouri-based World Wide Technology Inc. retaining the No. 1 spot with $5 billion in revenues, the top 20 highest-grossing leaders of this pack can be found among information technology, auto parts manufacturing, and foods services.

The nation’s 60 largest black-owned auto dealers have revved up from the industry’s rebound, collectively grossing $7.2 billion in 2012. The overall numbers of black-owned franchises, have not grown since pre-crash years though.

Black-owned advertising agencies remain challenged by larger, well-heeled Madison Avenue competitors that have encroached on the multicultural space. A few innovative be firms secured clients through multiplatform campaigns and content creation. Most, however, remained resilient as revenues grew 3.4%, from $278 million in 2011 to $287.5 million in 2012.

Moving forward, CEOs have to demonstrate a new level of inventiveness.Â  That’s what it will take for the BE 100s to enter and stay in the winner’s circle.