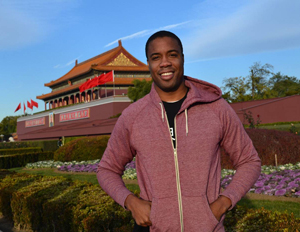 Diversity Abroad prepares the next generation of global leaders by connecting students and recent graduates to opportunities to live, work, and study overseas. Founded by Andrew Gordon, an effervescent millennial who radiates the joy of a man fully in his element, Diversity Abroad helps make global engagement happen for young people of color by working through institutions of higher education and other organizations, and by connecting students to resources and programs through its robust website.

Gordon himself went overseas for the first time at the age of 19, to visit his older brother who was studying in Spain. For about three weeks he and his brother toured Spain, France, Italy, Germany, and the Czech Republic. The experience would leave a lasting impression.

“That was the longest time I’d ever been away from my parents,â€ Gordon says. He would go on to study himself in Mexico and then in Spain; after graduating, he interned in Madrid and now speaks Spanish fluently. He credits the independence and resilience he developed having to navigate a different culture with giving him the confidence to start his own business.

Being a black American abroad caused him to experience black American culture in a richer way, Gordon says. “In the U.S., the richness of our culture isn’t necessarily apparent. Here, the conversation is more about deficit, more problem-centered – it’s not about this rich, textured culture that’s so powerful that everybody in the world knows about it.â€

He also says that living overseas changed his view of himself. He began to see himself as a citizen of the world and not just “stuck in the local. I saw the bigger picture and saw myself as part of something much larger. I felt like this is my world.â€

In an attempt to help other students of color experience the kind of growth he has, Diversity Abroad tours 100 campuses a year, including historically black colleges and other minority-serving institutions. It also holds an annual conference to help reach broader populations of students to study abroad.

Why study abroad?
Gordon says that one reason to study abroad is that the world is more connected. “We live in an increasingly interconnected world. More than 95% of the world’s population lives outside the U.S. Look at the benefits in technology, medication, business – so much is happening outside the U.S. For the next generation of black men and women to really take advantage of the opportunities in the 21st century, we must be globally minded, and that starts with being OK with very different societies and being able to navigate within them.â€

Gordon advocates studying abroad for undergraduate and graduate study. “When you look at higher education, there are wonderful institutions in the U.S., but depending on your area of study, if you’re in London, you’reÂ in what isÂ arguably the most global city on earth and you’re meeting classmates from literally all over. You can study for less time, less money, and in some places it’s possible to stay after graduation and work.â€