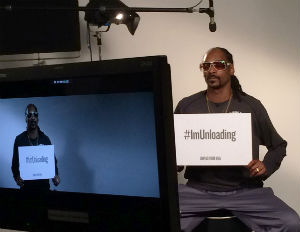 Entertainment icon Snoop Dogg recently caught the attention of Wall Street, Main Street, and the gun industry by joining forces with an anti-gun violence campaign called #ImUnloading.Â  It’s part of a project called “Unload Your 401k” and is a partnership betweenÂ  “Campaign to Unload,” “States United to Prevent Gun Violence,” and “No Guns Allowed.”

The campaign aims to get the nearÂ 52 million Americans who own 401 (k)s to pressure their financial companies to sell stocks in gun companies,Â  taking direct aim at the financial engine that churns the seemingly unstoppable gun lobby in Washington.

“I’ve been involved in the movement to stop gun violence for a while and was happy to lend my voice to another cause fighting this same fight,â€ Snoop tells BE.Â  “I’m tired of seeing our communities and loved ones die from senseless gun violence,â€ says the rapper who once championed gun violence in songs “Bang Out.â€

Taking Aim at ‘The Big Three’

“Greedy gun corporations are benefitting from the pain in our community,â€ said Dr. Rob Biko, Director of the League of Young Voters.Â  “It’s important that we vote with our money,â€ Baker adds.â€

The national divestment coalitionÂ was born out of the the Newtown school shootings in Connecticut. Jennifer Fiore, is the foundingÂ Executive Director of “Campaign to Unload” which spearheads divestment nationally.Â “When theÂ Senate background check bill failed in 2013, I saw how powerful the gun lobby truly was,Â and that we needed to counter its political power with our economic powerâ€Â said Fiore.Â  “Campaign to Unload” originated out of a partnership with now New YorkÂ Mayor Bill DeBlasio and 50 local and national organizations dedicated to ending gun violence.Â  In 2013, the group persuaded 10 hedge funds to divest $171 million from Smith & Wesson, Sturm Ruger, and Olin.

“We’re not trying to put these companies out of business, but we’re trying to remind them that they are responsible to the American public.Â  If we can’t get policies to do that, we will give them a nudge where it counts,â€ adds Fiore.

You can go to the Unload Your 401 (k) website. The site says your fund is, ” required by law to invest your money in a manner that’s suitable for your situation. It’s up to you to let them know that gun stocks are something you want to avoid–and it’s up to them to do the best they can to make that happen.”

The Interview:Â  The Power of the Black Purse

In addition to the impact Snoop’s attention may be able to leverage against the gun lobby, he is very cognizant of the impact he can have when it comes to helping Blacks look at their financial lives, particularly when it comes to saving for retirement.

A survey conducted by Ariel Mutual Funds andÂ  the Charles Schwab Corporation found that Blacks at age 42 have $11,000 saved for retirement, while whites have $48,000.

“You have to look at all of the reasons Blacks don’t invest.Â  Factors like income and employment Â account for a lot of the difference in investing and the feeling that we can’t afford to invest.Â  It’s often a question of resources, not desire,â€ says Valerie Rawlston Wilson, director of the Economic Policy Institute’s Program on Race, Ethnicity, and the Economy.

“I think it’s great that he will get people talking about these things and really important that we should find out if our money is going to companies that are doing things that are destructive in the Black community.Â  Consumers have power….There is power in consumption,â€ she adds.

Snoop echoed those sentiments in our full interview.Â  Please read it below and Tweet your comments to @stisdale1 #ImUnloading

(BE): Where did the idea for the #ImUnloading campaign come from?

(Snoop): The “Unload Your 401Kâ€ campaign was a partnership between my anti-gun violence initiative “No Guns Allowedâ€ and “Campaign to Unload” and “States United to Prevent Gun Violence.”Â  I’ve been involved in the movement to stop gun violence for a while and was happy to lend my voice to another cause fighting this same fight.

(BE): What do you aim to accomplish with the #ImUnloading campaign?

(Snoop): My goal is to encourage people to “Unload their 401Ksâ€ to save lives and make our communities safer.

(Snoop): Gun violence isn’t just an issue that affects people with 401Ks. Even if you don’t have a 401K, it’s still important to know where your money is going. We all can do our part to help stop gun violence.

(BE): This campaign also sends a strong message about investing. African-Americans do not participate in the financial markets at the same rate as other groups. Many of those reasons are socioeconomic and due to a lack of trust in Wall Street financial service companies. What message do you want to send to Blacks when it comes to investing?

(Snoop): My advice is if you’re going to invest, you should check with your employer or financial adviser to see where your investments are going.Â  You should also urge your employers to offer a “no guns allowedâ€ 401K option.

(BE): You have had run ins with the law in terms of gun possession. You have championed gun violence in songs like “Bang Out.” What has shifted in you to inspire this campaign and why?

(Snoop): I’m tired of seeing our communities and loved ones die from senseless gun violence. My “No Guns Allowedâ€ campaign was inspired from an open letter written by the Executive Director of the League of Young Voters thanking me for my single “No Guns Allowed.â€ The song spoke about the issues of gun violence in our communities and emphasized how we need to come together to spread the peace. It’s important as entertainers to lift up our voices to create change.