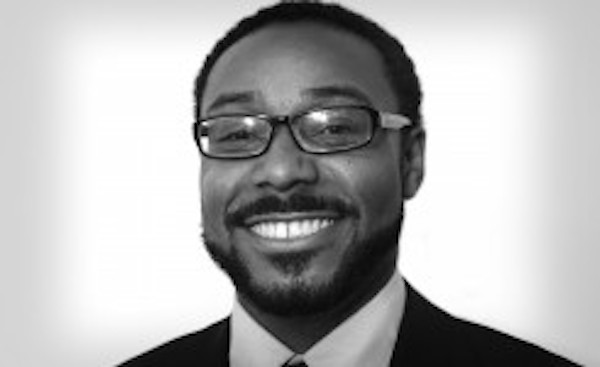 Justin Hansford, a law professor at Saint Louis University School of Law, has come to learn firsthand, the injustice that has befallen black men and women in society has risen to an alarming rate. The 33-year-old educator, who lives just 10 minutes from where the Michael Brown shooting happened, is one of the leading legal organizers behind the Ferguson To Geneva initiative. Incorporating legal history, legal ethics, critical race theory, human rights, and the Global Justice Movement into his lessons, Hansford cites Malcolm X and Marcus Garvey as his inspirations. “I wanted to be like [them] as a kid,”  Hansford told BE Modern Man exclusively. “I overcame my greatest obstacle when I was a teenager. I was not on track to attend college; I was suspended multiple times for fighting and misbehavior and had low grades.”

Hansford moved to his grandmother’s house and transferred to a public school in a more distant area. Separated from his peer group, he gorged himself in Alex Haley’s The Autobiography of Malcolm X and found his life changed. “I read the book straight, only stopping to eat and sleep,” he admitted. “I picked up the book because it was on my mother’s bookshelf. After reading that book, I wanted to use my mind as a tool to fight for justice.” Through the literature of black authors such as W.E.B. DuBois, James Baldwin, and other black history books, Hansford managed to pick himself up, do well on the SAT, and even received a scholarship to attend college.

Fast forward to the here and now, and Hansford stands among the people in the continuing struggle for equal human rights and protection under the law. A graduate from Howard and Georgetown Universities, the founder of The Georgetown Journal of Law and Modern Critical Race Perspectives advocated for Michael Brown in the aftermath of his shooting death by police officer Darren Wilson. As one of the principal pens behind the Ferguson to Geneva human rights shadow report, Hansford accompanied the Brown family to Geneva to testify in front of the United Nations. It is a dark theme that is more apparent during these times, as lives are repeatedly and unjustly being cut short . But, true to our spirit and resiliency, Hansford believes that this is a small part of one of the  key tenets carried in the DNA of a black man. “It’s a gift and a curse,” he says, “as we are the biggest underdogs in the world. The most powerful country in the world has put us in its crosshairs, and yet when we succeed it’s a chance for it to be a shock. [Our lives] and successes can be exhilarating and unpredictable—that’s electric!”

Highlighting strong role models within the community is something that Hansford, a prestigious Fulbright scholar, agrees with, saying, “Black youth need people who really care about them and empathize with their struggle.” A mentor at the African American Male Scholars Program at Saint Louis University, Hansford impacts his community directly by opening up his heart, empathizing, encouraging, and inspiring others to learn who their best selves are. “Through this program, I am able to form relationships with undergraduate students on a regular basis. This allows me to [also] engage with the youth in my community, and provide encouragement for them in all aspects of their lives,” he says.

Hansford was open in discussing just how the millennial generation can cultivate a successful career in this new age. “Electronic contact information is easy to find somewhere in cyberspace,” Hansford says. “When it comes to building your career, it’s important to be the aggressor and take initiative. Cold call, e-mail the people you want to meet… even if you don’t know them, and follow up with a call.” From a man who has appeared on CNN, MSNBC, PBS, National Public Radio, Time Magazine, Ebony, and the Globe and Mail, you can’t go wrong with that type of free advice.

On the next page, read how Justin Hansford deals with stereotypes and being an agent of change…