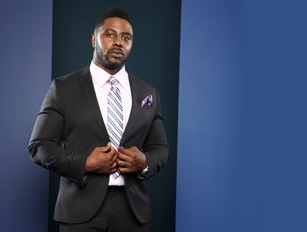 Depression is a condition that is taboo and hard for many people to openly discuss, but Jay Barnett, our latest BE Modern Man ambassador, was inspired to fight through his own bouts with depression to become an actor and motivational speaker to youth. “I lived through multiple suicide attempts in my attempt to overcome depression,â€ Â Barnett tells BE Modern Man exclusively. “My issues started as a teenager and progressed into adulthood.â€

Barnett created TheMeProject and TheWeProject to serve as a platform for teens who felt just like he did. “I wanted to give them the opportunity to not only hear but see a different perspective beyond the pain of their own experiences in life, which I had gone through.â€ The five-week self-development course is aimed toward middle school boys and girls, and helps serve as a warm embrace as they transition into “men and women of excellence.â€ “I had to overcome being different and accept that my path was not like others,â€ Barnett said. “I had to embrace rejection and not be offended because someone didn’t understand my purpose and passion.â€

Purpose and passion are two things that together drive the 32-year-old, multitalented Barnett to greater lengths than anyone can imagine. In 2014, Barnett starred in the faith-based drama Signed, Sealed, and Delivered, which told a story of “betrayal, love, redemption, and forgiveness.â€ He led the production as King-Pin Mack Biggs, a man who sets out to share Christ’s word after serving 10 years in prison for drug trafficking, money laundering, and attempted murder. As the film sold out during its initial run in 2014, Barnett, who had already impressed audiences in Trauma (2013) and Bicycle Day (2011), wanted to offer this perspective to the BE Modern Man reader: “I believe one of the key tenets that us as black men have in our DNA is the ‘us against the world’ mentality. We can create an uncanny focus toward success only if channeled in the right direction. I’d also like to say that we have a more spiritual base foundation – most of our grandparents were raised in the church – which is dynamic for those black men who were into Christ or even raised by single mothers.â€

When asked how more people of color within Hollywood can break through to create an impact amongst the young generation of viewers, Barnett said, “Each generation is different and one must be able to transition as the other gets left behind. The only way you can make an impact is by being unconventional, nontraditional, relevant, and transparent.â€

Read the rest of Jay Barnett’s story at BE Modern Man.