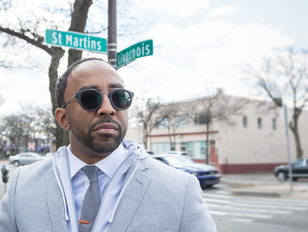 One Word That Describes You: Disruptive

Hajj Flemings is all about branding. So much so, that he told his wife he wouldn’t name his daughter Kennedy if the domain name was taken. A brand strategist and tech entrepreneur, Hajj has made it his business to help people tell their stories and convert them into value. A native of Detroit, Michigan, Flemings started Brand Camp University in 2008, a national conference series on branding, entrepreneurship, and technology, hosted annually in Detroit and Boston. A Michigan Tech graduate, Flemings worked in the auto industry for 10 years while managing his own design business on the side. His side-hustle eventually became his primary business. He has been featured on NBC, Fox News, ABC, ESPN.com, and BusinessWeek.com. He also travels nationally, speaking as a brand strategist.

Flemings’ efforts towards helping brands grow has also helped his own. With a book titled The Brand YU Life: Re-thinking Who You Are Through Personal Brand Management, his tech journey has been chronicled on CNN’s documentary “Black in America 4: The New Promised Land: Silicon Valley with Soledad O’Brien.â€

A self-described disruptor, Flemings isn’t interested in standing with the crowd. “I don’t fit into a box,â€ he tellsÂ BE Modern Man exclusively. “I am a misfit. I’m a creative that went to engineering school who is a corporate dropout. My uniqueness is in storytelling, which chronicles my work so that it can be consumed digitally to inspire people that I have never met.â€

Flemings’ ability to create impact in a crowded space lies in his character, integrity, and relationship-building prowess. “Ultimately having access to and building relationships with the right people is critical,â€ says Flemings.

Men of color are building, growing, and impacting many different industries. Flemings believes that we are being championed but, typically, as talent in the athletic and entertainment arenas; not as creators and producers of companies and great ideas.

“I am not minimizing the impact of athletes and entertainers, but we are typecast to where I feel a one-sided story is being told.Â  For example, Apple buys Chinedu Echeruo’s HopStop company for one billion, but there is very little media-play about his story compared to the Instagram liquidity event.â€

Read the rest of Hajj’s story at BE Modern Man.