BE Publisher Reflects on Obama-King Connection 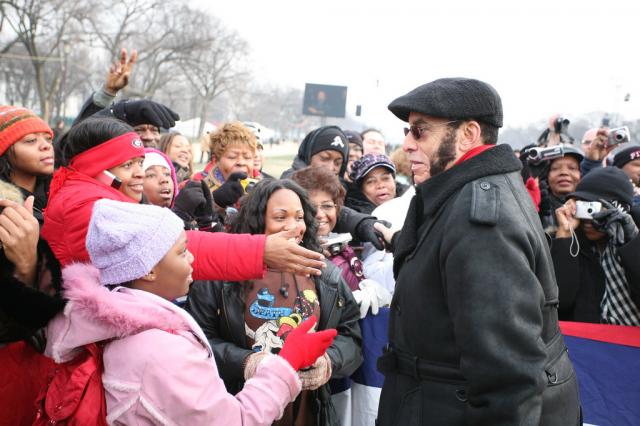 Celebrity sightings in Washington, DC, are nothing new these days but still, it hasn’t diminished the excitement the city’s residents and visitors feel when they spot someone who, much like the president-elect, has inspired them and encouraged the idea of thinking big. This was the case earlier today when Black Enterprise chairman, founder, and publisher Earl G. Graves Sr., visited the National Mall to be interviewed by CNN. “To me, you’re a star,â€ cried one young enthusiast.

And because it is often the most successful of us who are also often the most generous and accessible, Graves stopped to pose for photographs, sign copies of Black Enterprise magazine, and even haggle with a vendor over woolen caps embroidered with President-elect Barack Obama’s image that he bought for his grandchildren to commemorate Obama’s success.

But it was also a day of reflection for Graves, who years ago as a young staffer for Sen. Robert F. Kennedy, had the privilege of meeting Dr. Martin Luther King Jr.Â  In fact, he escorted Kennedy to King’s funeral and Coretta Scott King to Kennedy’s funeral.

Graves believes that if King were alive today, he would of course be proud of Obama’s success, but perhaps would have thought such an event took longer than necessary. “He was a visionary and probably would have suggested that it could have come about earlier. But I think it’s provident that Obama won at this time. We needed change. We’re hurting as a country with people losing their homes and jobs, and needed to have someone who also has a vision,â€ says Graves. “Then along came this guy who was smart, well-versed, and had a vision. And the country was more ready for this than many people realized.â€

Graves counts himself among those who were uncertain that Obama could reach the pinnacle of political success.
“Looking back, I initially didn’t think it could happen,â€ he says. “I just thought that racism is so endemic to this country that people wouldn’t vote him. His election makes me feel proud, happy, and optimistic. Obama’s honeymoon will end soon, but he’s tough and has a great team behind him. This was the right time.â€

As Obama and Vice President-elect Joe Biden and their families joined Americans across the country to celebrate King’s legacy, Graves recalled how the assassinations of both men more than 40 years ago inspired him to create a newsletter for African American entrepreneurs. That newsletter grew to be what is known today as Black Enterprise magazine,Â  and a centerpiece of an organization that includes two television programs, a Website, as well as three well-attended entrepreneurial conferences. And in spite of that success, he, like King, is not too proud to feel humbled, and yes, proud, by the opportunities Black Enterprise has been given to cover Obama’s ascension, including joining him on the weekend train