BE Smart: All Star Code Educates Next Generation of Tech Entrepreneurs 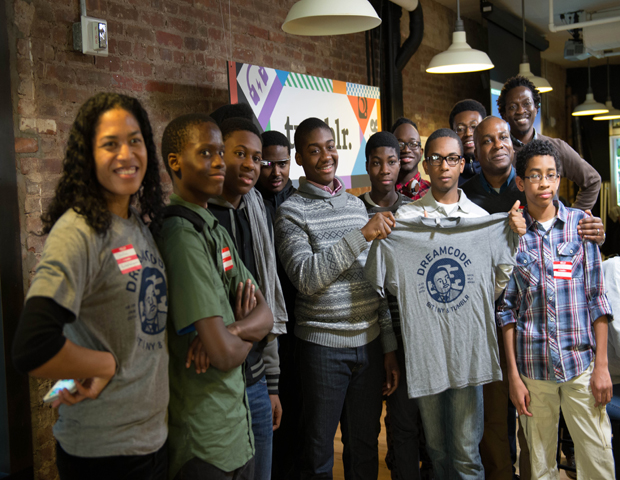 New York City-based All Star Code dropped by Tumblr headquarters to get in on the fun. The non-profit initiative offers young males a curriculum that includes workshops, ongoing mentorship and networking opportunities, as well as a six-week summer intensive program set to start in 2014. ASC founder Christina Lewis Halpern is determined to fill the technology career pipeline with qualified, young black men. (Image: Kevin Steck)

At the midtown Manhattan offices of Microsoft, teams of young innovators made a series of presentations before an audience that included parents, instructors, and tech professionals. One group shared its development of a search engine called NewsReader for online users seeking to access the latest headlines. Another unveiled the interactive platform and animation of an Internet video game–Lamz Space War–in which players get “to blow stuff up.” And yet another designed the new online model for card sharks itching to place bets on blackjack.

The presentation at the science fair and commencement ceremony displayed the ingenuity from the fertile minds of roughly 20 young African American and Latino males who participated in the Summer Intensive sponsored by nonprofit All Star Code. In just six weeks, administrators saw their charges advance from virtually no coding experience to becoming as skillful in HTML, JavaScript, and JQuery, among other programs, as advanced placement computer science students. Beyond skills acquisition, Intensive participants gained a better understanding about collaboration and perseverance.

Says Djassi Julien a junior who never engaged in coding before working 70 hours a week with the blackjack team: “It was challenging … I found out that you had to deal with three failures for every success.

It was promising you men of color like Julien that inspired Christina Lewis Halpern, 34, to launch All Star Code as a vehicle to diversify the tech space, providing training and early exposure to computer science. It’s much needed in a space in which African American entrepreneurs comprise roughly 1% of VC-backed startups and the median amount of secured capital by an all-black founding team has been $1.3 million versus $2.3 million for white counterparts, according to CB Insights.

The mission of this 2013 White House Champion of Change was driven, in large part, by the legacy of her father, Reginald F. Lewis, the late financier who created TLC Beatrice International Holdings, the first black-owned global enterprise to surpass the billion-dollar revenue mark. Throughout his business career, the BE 100s CEO helped black businesses gain access to financing and became the standard bearer for African Americans on Wall Street. “I realized that if my father were a young man today, he would no doubt be working in technology, the growth industry for building wealth in the 21st century, Lewis says. “I began investigating ways to help minority talent gain access to the tech world. While I discovered a number of programs that addressed the lack of women in the industry, I did not find a sufficient number of resources for young men of color.

In developing All Star Code, Lewis talked with professionals in education, philanthropic, and technology circles. In 2013, the philanthropist and former journalist used a $100,000 seed grant from her family’s foundation and another $25,000 in grassroots backing to start the outfit.

Today, All Star Code counts Google, AOL, Spotify, Dropbox, and News Corp. among its corporate partners. It also works closely with educational organizations such as Sponsors for Educational Opportunity, A Better Chance, Eagle Academy, and Prep 4 Prep as well as organizations such as #YesWeCode, the movement to help convert 100,000 at-risk youth to become world-class computer coders that is spearheaded by former Obama White House adviser Van Jones, and DigitalUndivided, an organization that works to expand the participation of urban tech. To run the day-to-day operations of All Star Code, Lewis has recruited professionals like Managing Director Robert Bonner, who has had more than 15 years of experience in education with groups such as Teach for America; Computers for Youth — New York City; North Star Academy Charter School; and The Center for Healthy Schools, Families, and Communities.

Beyond the demanding, project-based Summer Intensive, All Star Code also provides youth access to a year-long slate of workshops, student-centered activities, and discussions with entrepreneurs, CEOs, developers, and designers–some of whom serve as mentors. Last fall, students gained the opportunity to power their entrepreneurial aspirations through two “Design A Startup In A Day” workshops where they learned about business strategy and team building.