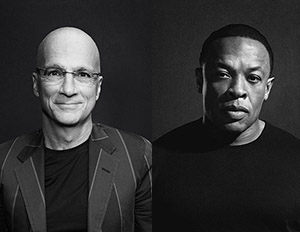 Everyone’s been talking about Apple’s acquisition ofÂ Beats Electronics for a cool $3 billion, and the media—along with industry watchers—have explored how co-founders Andre “Dr. Dre” Young and Interscope’s Jimmy Iovine came to land in a gold-mine.

As with any partnership, before i’s are dotted and t’s are crossed, each party must know the value they respectively bring to the table for current and future collective wins.

Both Dr. Dre and Iovine are music industry pioneers and powerhouses, having built up impressive rÃ©sumÃ©s,Â relationships, and seen longevity unmatched by many with whom they started out. Dr. Dre was part of the baby stages of ’80s hip-hop, with his introduction on the scene as a DJ, before becoming one of the founding members of legendary California rap group N.W.A. He was a game-changer in the ’90s, creating a unique sound that would stand the test of time and winning awards working with iconic artists including Snoop Dogg, Tupac, Warren G and Nate Dogg and producing one of the top hip-hop albums of all time, “The Chronic.” (He’s also a successful executive and CEO of Aftermath Entertainment.)

Jimmy Iovine got his early start in the music business as an engineer working with heavyweights like John Lennon and Bruce Springsteen. He went on to co-found Interscope Records, which spawned a roster of who’s who in hip-hip, R&B and rock including Fergie, Maroon 5, Kendrick Lamar, and Lady Gaga, to name a few. He also co-produced hit movie, “8 Mile,” starring breakout star and hip-hop phenom Eminem.

Just based on these guys’ career receipts, if anybody knows the needs, culture and technological fancies of the music consumer, it would be them. Looks like a partnership made in heaven.

So why do I mention all this history? Well, when I saw news that Jimmy Iovine’s music industry relationships could indeed make negotiating licensing that much easier now that Apple has bought Beats, my first inkling leaned toward boss moves lessons. Here are three inspired by the Beats partnership and deal that millennials can take to the head:

1. What’s your value add? In any endeavor or plan you have, did you think about the value you bring to the table and the outcome of mating your value with someone else’s, whether it’s a business partner or company you plan to work for? Also, it’s not just about the current value add, but the future as well. What can you forsee happening and what role do you see yourself playing? Think about these things as you decide what boss moves to make and when.

2. How valuable is your network? True, we’re all human beings, but almost everything—and everyone—plays some sort of role in terms of career advancement and just simple lifelong progression. Are you forging dynamic relationships not only with today’s leaders, but those you see on the come-up based on their skills, ambitions and ways of thinking? Innovation comes when people can think beyond, “What can you do for me today?” or “What can I do for you today?” Think about that person who is just always pushing for more, is good at building relationships (and sustaining them) and has a unique, innovative way about doing things, from small to large. (I’m greatly inspired, for example, by a woman who, despite us hanging out several times, I’d never known sparked a biking, cultural and charitable movement in Brooklyn, N.Y. She’s a quiet, graceful storm, not boastful but making big boss moves.)

3. How can you best forge synergies for reciprocal success? True, not every partnership or company will hit a billion- or even million-dollar jackpot, but why not plan as though you might? What big ideas are out there, and who’s behind them? What big ideas do you have, and who can you partner with to make them happen? These are things to think about, again, for both short- and long-term planning of career advancement. I’ve always been a big, anything-is-possible thinker, thus I feel limitless in what I could accomplish. I figure, if I were to partner with others who think the same and we all can execute our respective talents for a goal, anything can happen. Who would have thought Apple would buy Beats? And when Iovine and Dr. Dre bought back portion of shares from the original majority stakeholder HTC, for $150 million, who would have thought things would go the way they have? Forward-thinking innovators do.

When it comes to value addition, I urge all millennials to have the mindset that their skills and talents are indeed quantitative capital and that they should leverage it similarly to how they’d leverage money in the bank. Be smart, know what you offer and what value add others do as well.