'Because of Them, We Can' Campaign Celebrates 2015 Graduates 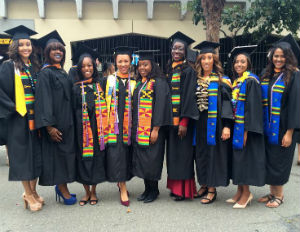 Eunique Jones, founder of Because of Them, We Can, a campaign that educates and connects younger generations to heroes who have paved the way, has continued her mission to refute stereotypical images of African Americans with an initiative that showcases 2015 graduates. The uplifting and powerful photo story highlights the world’s future generation of innovators, change makers, entrepreneurs, professionals and investors, to name a few.

The Because of Them, We Can campaign was birthed out of Jones’ desire to share rich African American history and the promising future of African Americans through images that would refute stereotypes and build the esteem of our children. Although she originally intended to publish the campaign photos via social media during Black History Month, she realized how necessary it was to go beyond 28 days.

“My twin sons, Aspen D. McNair and Ashton D. McNair, graduated from Delaware State University on May 17th 2015. They earned [bachelors degrees in] Criminal Justice w/ a minor in Coaching Management and Mass Communications w/ a minor in Hospitality & Tourism Management, respectively. This was indeed a day of celebration. However, it was not unexpected or unplanned. Both my husband and I have college degrees and furthering [our sons’] educations was a common topic in our household. Yes, myÂ sons have dreds and tattoos but their outside appearance does not define them. They’ve both held one or two jobs consistently since the age of 15 and have never been arrested. Growing up, they were constantly reminded that their actions, good or bad, have consequences. I will admit that it wasn’t always “peaches and cream,â€ but I love my sons. And like any parent, I did my best to raise respectful men with strong morals and values as human beings.”