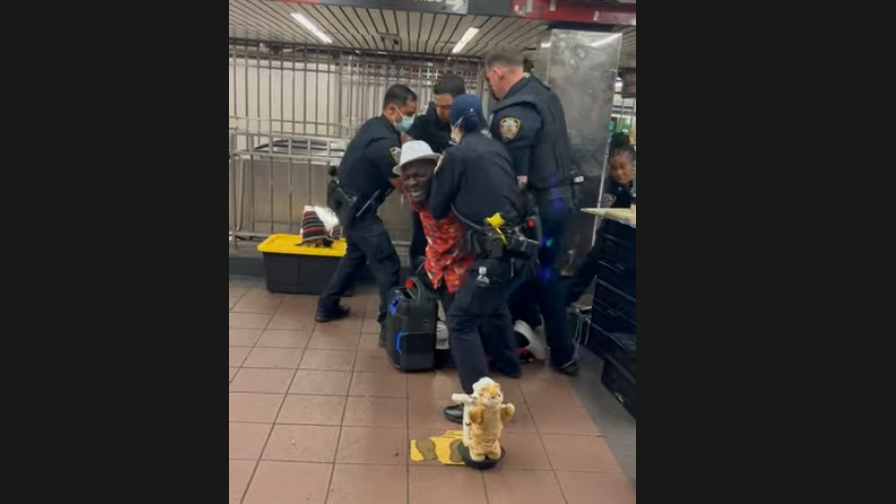 A group of police officers in New York City dragged a saxophone player from a subway station as he was performing for spare change from MTA commuters.

According to The New York Daily News, a man who has been playing the saxophone at the 34th Street subway for five years was taken out of the subway station forcibly by six police officers last week.

John Ajilo, who uses the moniker “Jazzajilo” was seen on video being snatched up by the police officers as they claimed that he was allegedly violating MTA (Metropolitan Transportation Authority) rules.

As the video shows, the six police officers approached Ajilo at the Herald Square subway station and as he is speaking to the officers, it appears they are asking him for a permit to play music there. During the conversation, the police officers are seen grabbing him as he shouts for people to help him until the officers, in a group, gain control of him as they slapped handcuffs on him.

The musician posted a statement on his YouTube page:

“I was shut down handcuffed and taken to the Police station for performing in the same spot 34th Herald Square, I had been performing on and off for about five years. The police always see me there everytime and they also cheers me on. My wrist is injured from the tight handcuffs, Am emotionally depressed, and my body hurts . My saxophone was damaged, our dancers were incomplete and broken too after they were released to me 😔,And Four pink tickets to top it all after overnight in the cell all for a struggling subway street musician trying to take care of family and my four Autism / Autistic Children and the community musically. The written court Appearance date on the Pink Ticket is July 13th at Kings and NewYork Criminal Court 9:30am.”

Authorities stated Ajilo was grabbed by the police officers for allegedly violating MTA rules which include “interfering with passenger movement,” using a speaker, and ignoring a sign. He was given several summonses for “panhandling in transit” and disorderly conduct.

The MTA also made a statement pertaining to the incident.

“The MTA has rules of conduct that are for the safety of all riders and employees and are not optional,” said Pat Warren, MTA chief safety and security officer. “We appreciate the mayor’s and police commissioner’s commitment to keeping New Yorkers safe by ensuring those rules are observed across the transit system.”