Ben Jealous to Step Down as President of NAACP 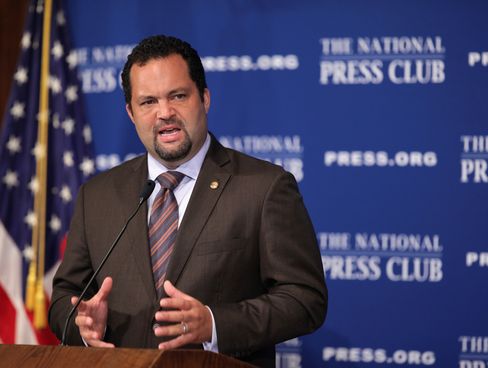 Benjamin Jealous announced Sunday he is stepping down from his post as president of the NAACP.

Benjamin Todd Jealous, who assumed the presidency of the NAACP at 35, announced Sunday that he is stepping down from the position after five years that saw him become the face of the organization.

“Leadership knows when to step up and when to step down,” Jealous told USA Today. “This day I can say with pride that I’m prepared to step down and make room for the next person who will lead this organization to its next chapter.”

The decision came as a surprise to NAACP board chairwoman Roslyn Brock. “Truly we were surprised,” said Brock according to USA Today. “We’re disappointed that he’s leaving at this time. He’s five years in and we were expecting him to be with us seven years, based on our agreement with him.”

In a statement released Sunday, Brock highlighted Jealous’s accomplishments with the organization.

“We thank President Jealous for his time leading the Association,â€ she said. “Under his leadership, the NAACP has built a highly competent staff that will carry our mission forward and meet the civil rights challenges of the 21st century. Our board, staff and volunteer leaders throughout the country deeply appreciate his sacrifice, and will continue to implement our game-changing goals for the next half century that include the restoration of Section 4 of the Voting Rights Act, implementing Trayvon’s Law, bolstering civic engagement efforts and ensuring our community is enrolled in the Affordable Care Act exchanges.â€

Jealous said time away from his young family was increasing tough on his wife, Lia Epperson, a civil rights attorney. His children are, 7 and 13 months. He is said to make a formal announcement to his staff on Monday.

It’s not immediately clear if there was a search underway for the next president. Jealous is the organization’s 17th president — there has never been a female leader of the organization; some observers are already suggesting the NAACP take a close look at female candidates.

Before long, many will point to Sherrilyn Ifill, President and Director-Counsel of the NAACP Legal Defense and Educational Fund. “A great leader leaves his org. better than he found it on day 1,” she tweeted on Sunday. “This you’ve done. Congrats to you my brother.”

Jealous said black leadership tenure is too often interrupted by death or scandal, and was proud that his leaving the organization wasn’t due to either. In the statement released Sunday said he was proud of what he accomplished.

“The NAACP has always been the largest civil rights organization in the streets, and today it is also the largest civil rights organization online, on mobile and at the ballot box too,â€ Jealous said. “I am proud to leave the Association financially sound, sustainable, focused, and more powerful than ever. Beginning next year, I look forward to pursuing opportunities in academia to train the next generation of leaders and, of course, spending a lot more time with my young family.”