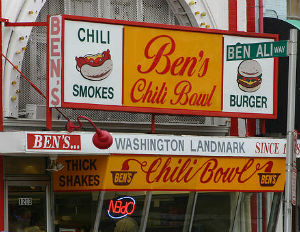 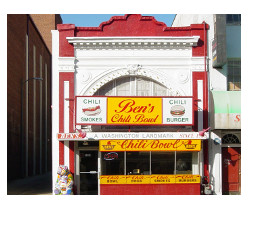 In 1958, newlyweds Ben and Virginia Ali used $5,000 to begin renovating a building at 1213 U Street. Built in 1910, it first housed a silent movie house called the Minnehaha Theater. Later, Harry Beckley, one of D.C.’s first black police detectives, converted it into a pool hall.

To mark their 55th anniversary, special invited guestÂ Bill Cosby will speak at Thursday’s celebration, which kicks off at 10 a.m. This is not the first time the comedian has worked with the restaurant. Cosby’s voice can currently be heard on the voice mail greeting of the restaurant.

According to the Washington Post,Â the range of A-listers who have stopped by Ben’s is impressive. Actors Denzel Washington and Chris Tucker, andÂ former French president Nicolas Sarkozy have visited the restaurant. In the early days, according to Ben’s, guests included Duke Ellington, Ella Fitzgerald, Miles Davis and even Martin Luther King Jr.

The restaurant, which is often listed as a “must visit” while in DC, is famous for its half-smoke sausages smothered in chili. A popular gathering place for African-Americans in the city, Ben’s has remained in its original location through periods of good and bad for the surrounding neighborhood.

“The one constant we’ve had since 1958 has been the loyalty of our customers, and we listened when you said, “whatever you do, never change this place,â€ says the restaurant’s website. “The counter, booths and stools are all original; the fresh homemade chili is still made with love, using the same secret recipe. To our customers and especially our regulars, we appreciate you and thank you for supporting Ben’s.”