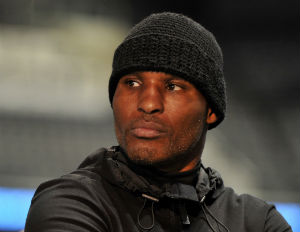 Bernard Hopkins has his sights on Floyd Mayweather Junior and according to Yahoo Sports, Hopkins wants the showdown to happen after he turns fifty in January.

The notion of Hopkins fighting Mayweather may have seemed unrealistic even as recently as a year ago but get this, Hopkins at 49 years old, is just one victory away from becoming the undisputed light-heavyweight champion of the world. Only Haitian born Canadian boxer Adonis Stevenson now stands in his way.

There are a bunch of aging athletes in professional sports today still competing at an elite level — Baseball’s Derek Jeter, The N.B.A’s Tim Duncan, the M.M.A’s Dan Henderson, are a few names that come to mind, but no-one alive is doing it like BHop — and making it look so effortless.

When it comes down to taking care of business inside the ring Bernard Hopkins has put together such a pristine body of work he’s a shoo-in for first ballot Hall of Fame. He already cemented his legacy after defending his middleweight title a record twenty times from 1995 until 2005.

Nine years later, at the age of 49 Hopkins is still at the top of his game. As Bernard himself puts it, he’s not out there fighting “cream puffs”. Indeed. Hopkins cannot really be accused of picking his battles. The man fights anyone the commission and Golden Boy Promotions decides is next.

The physical and mental demands of the sweet science is no secret. Hopkins began his professional boxing career in 1988. When Ronald Reagan was President. So how does he do it?

If Father Time and Mister Booze are the unbeatable tag team champions of athlete decline, Hopkins has already banked a winning formula. Hopkins says he doesn’t touch alcohol, doesn’t smoke and is very careful about his diet, he normally celebrates each victory with a slice of cheesecake. The man has the self-discipline of a Jedi master.

Hopkins wants to meet Mayweather at middleweight. Which would mean Mayweather has to bulk up while he drops a few pounds.

Here’s how Hopkins tells it to Yahoo Sports, “I’ll give anybody a run for their money. If they are unbeaten I will take their 0, give them their first loss. I could make 165, 168 (pounds) real comfortably.”

Statements like that from Hopkins increase in credibility with each victory.

So why does he do it? He famously promised his dying mother he would stop fighting after he turned forty. He doesn’t need the money, he already has the fame and his legacy is already intact. The best way it seems to answer the big question is simply because he cant.