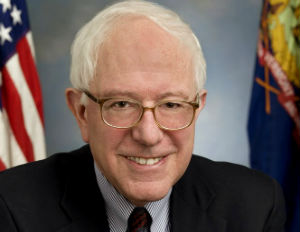 On Tuesday morning Bernie Sanders endorsed Hillary Clinton at a rally in Portsmouth, New Hampshire, signaling the start of a united Democratic push to get Clinton in the White House, and keep Trump out.

After thanking the 13 million Americans who cast their vote for him during the drawn-out Democratic primary season, Sanders finally delivered his long-awaited endorsement of Clinton.

“I have come here today not to talk about the past, but to focus on the future. That future will be shaped more by what happens on November 8 in voting booths across our nation than by any other event in the world,â€ Sanders said. “I have come here to make it as clear as possible as to why I amÂ endorsing Hillary Clinton and why she must become our next president.”

Sanders went on to praise Clinton’s stances on a number of issues, including healthcare, income inequality, and student loans.

Sanders decided to save the elephant in the room for last.

“It is no secret that Hillary Clinton and I disagree on a number of issues,â€ SandersÂ said. “That’s what this campaign has been about. That’s what democracy is about.”

“But I am happy to tell you that at the Democratic Platform Committee which ended Sunday night in Orlando, there was a significant coming together between the two campaigns and we produced, by far, the most progressive platform in the history of the Democratic Party,â€ he continued. Â “Our job now is to see that platform implemented by a Democratic Senate, a Democratic House and a Hillary Clinton president — and I am going to do everything I can to make that happen.”

Sanders’ prior refusal to drop out and officially endorse Clinton led some party leaders to accuse him of obstructing the typical party unification process that occurs once a winner is declared.

However, Sanders’ pledged to remain in the race until he ensured certain policies of his “political revolutionâ€ were added into Democratic Platform.

In the end, the Sanders camp ended up walking away with several wins, including the gradual implementation of a $15 federal minimum wage, new limitations on fracking, and a tougher agenda on Wall Street.

With these policy concessions in hand, Sanders handed Hillary his stamp of approval.

Clinton Vows to Continue the Fight

After a hug from Sanders, Clinton thanked Sanders for his endorsement, but also for his “lifetime of fighting injustice.”

“Thank you, thank you Bernie for your endorsement,â€ Clinton began. “But more than that, thank you for your lifetime of fighting injustice. I am proud to be fighting alongside you because, my friends, this is a time for all of us to stand together.â€

Clinton then thanked Sanders for bringing a new wave of voters to the party, in an attempt to welcome the young voters who were the source of multiple surprising victories for Sanders. Clinton struggled to attract young voters throughout the primaries, resulting in landslide wins for Sanders in the 18-30 age group.

Throughout her remarks Clinton stressed the need for party unity to order defeat Republican presidential nominee Donald Trump in the November general election.

“You can put lipstick on a pig but it’s still a pig,â€ she said.

Clinton also touched on the recent deaths of Alton Sterling and Philando Castile, while calling for standardized national guidelines to stop theÂ “the tragedy of black men, and women and children killed in police incidents.â€

When someone in the crowd shouted “black lives matter,â€ Clinton responded with “Yes, they do.â€

“You’ll always have a seat at the table when I am in the White House,â€ she said.