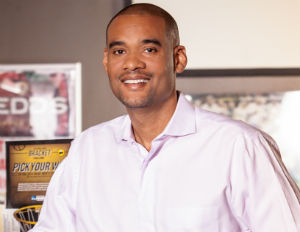 Karim Webb is no stranger to the Black Enterprise Entrepreneur’s Summit. As the 2014 winner of the Annual Small Business Award for Franchise Company of the Year, the 25 year restaurant industry veteran walked away with the trophy thanks to his success with Buffalo Wild Wings Grill & Bar. Owning two franchises in Los Angeles (Torrance and Baldwin Hills), his Baldwin Hill location became the first of its kind, offering casual dining in South Los Angeles in 25 years.

Today, as the Operations Partner of PCF Restaurant Management, Webb is a restaurant guru. Growing up in the franchise business, his parents owned fourteen McDonald’s restaurants. After attending Morehouse College, not only did he go on to work for the McDonald’s corporation completing its McDonald’s training programs.

But 5 years after the 2007 opening of his two LA Buffalo Wild Wings locations, Webb was credited with being the brains behind seeing that his Baldwin Hills venue achieved the highest sales percentage increase of any Buffalo Wild Wings in 2012 and 2013.

Dedicated and passionate about mentoring African American youth, creating jobs, and filling the young with necessary skills and leadership needed to follow in his footsteps, Webb’s non-profit work as spokesperson for BLOOM, finds him motivatingÂ  14-18 year old Black males in the Los Angeles probation system. Willing to offer advice to the readers of Black Enterprise, Webb shared his thoughts on making it in the franchise business world.

BlackEnterprise.com If you had to offer a tip to finding success in the restaurant franchise business, what’s the first thing that comes to mind?

Karim Webb: Get involved with something you know. If you don’t, the learning curve is going to be pretty steep. The margins are tentative. You gotta be pretty good at what you do to make sure the business works. There are people in franchise business who fail, who don’t know. And if you don’t know it, go learn it, go work for someone else and become pretty confident.

What’s an important thing for an entrepreneur franchise owner to do when first getting started?

Get involved with a company that is well established where you can develop relationships with other franchises and talk to them about their experience, one with the brand and business model and two with the franchise door. And don’t bite off more than you can chew. Make sure that you’re going to have considerable cash from the beginning. What business looks like in year two or three looks different than year one. A lot go out of business because there’s not enough to make it through the lean first 6-18 months.

What’s the biggest misconception you had going into the business that you realize now?

The biggest misconception I had was how involved you have to be as a developer. It’s one thing to be in business, let’s say if you’re in the hair salon business or massage parlor or a real estate franchise. You’ve got to be knowledgeable enough to manage a contractor doing construction related stuff.Â  So in restaurant franchising, I also had to become proficient at managing people in construction, real estate site selection, and those are things that don’t have anything to do with selling wings or beer. So I really underestimated how critical that piece is going to be.

What’s happened for you since you won the Franchise Company of the Year Award?

When we got this award, we had two Buffalo Wild Wings, and now we have a third in Carson [California]. We have gotten a lot of solicitations we’re considering. So we’re just at the beginning of a lot of growth over the next two years. Coming out of the Entrepreneur’s Conference with BE, I’ve created some talks with young people. My passion is mentoring African Americans. We need black people to know how to hold young people accountable so we can get them working.

The 2015Â Black Enterprise Entrepreneurs Conference + Expo hosted by Nationwide, May 13-16, at the Hyatt Regency Atlanta. Expect innovative sessions, high-powered speakers, and an early peek at the products, trends, and services you’ll need to stay ahead of the curve. Be sure toÂ enter our Elevator Pitch Competition to qualify for the $10,000 grand prize. To register and find out more, visitÂ www.blackenterprise.com/ec/