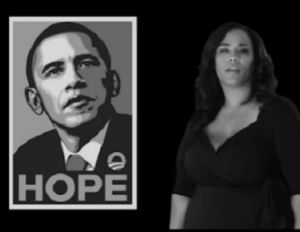 “When Obama was elected it was thrilling,â€ says a man in the ad. “What has he done as president?â€a woman asks, saying that the president has cut support to black colleges and businesses. “And his support of gay marriage is a slap in the face to people of faith,â€ she says.

“Once [Obama] got into office, he didn’t pay any attention to the black community,â€ he said.

To make sure his message to African Americans would get across effectively, Shemwell partnered with Reverend Wayne Perryman, a local black evangelical pastor in Washington. The author of Whites, Blacks & Racist Democrats and activist for black issues echoed the same idea, calling the black community “a forgotten race.â€

“The Democrats take it for granted. They don’t put anything on the table, but they get our vote,â€ he said. “For all the votes they’re getting, they should have an agenda.â€

Perryman believes the opposite for the Republican Party, citing Romney’s NAACP speech.

“When he went to the NAACP and spoke, he talked about the conditions in our schools, in our communities,â€ he said. “He did make an appeal to African Americans, but we’ve seen no such appeal coming from Obama.â€