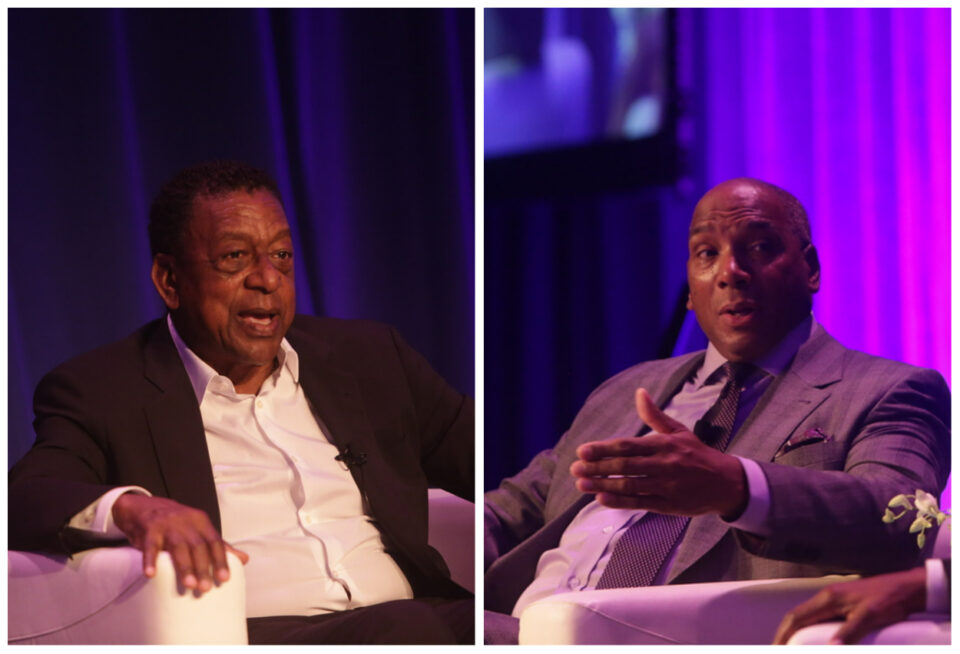 The two men began the conversation by discussing Johnson starting BET and how selling the company to Viacom for $4 billion in 2000 created several Black people, millionaires.

“That happened because we did something most Black companies didn’t do, We turned from a company that was closely held by basically me and John Malone and some other investors, but when we took it public we created stock capital, equity,” Johnson, the founder and chairman of The RLJ Cos., told the audience.

“That allowed the people that work with me to share in ownership, so when BET went public they were given shares and when it was sold those shows turned into Viacom stock, so the idea was everybody started at the bottom and everybody rode the elevator up.”

The two CEOs also discussed how Johnson is still working and growing while getting older. While Johson has more than enough money to call it quits and spend the rest of his day on a beach, he’s still thriving and moving forward.

“I just happen to be fortunate, I took the company public, and I got on the board of directors,” Johnson said. “From there, I got on the board of directors of Hilton Hotels because they knew I had a background as a publicly traded company executive. I talked to the CEO of Hilton, and he said, ‘Bob, we have hotels that we don’t consider the core of our business, how would you like to buy those hotels and run them and own them?’ So we bought six hotels, and overnight we became the largest Black-owned hotel company in the U.S.”

From there, Johnson got into the car business, forming a minority-owned car dealership in the U.S. with more than 35 locations, but he didn’t stop there.

“For some reason, I had my eyes set on a basketball team because by that time, just being first helps you, so let’s just be first in everything else. So I said I’ll go buy a basketball team, and I had the capital, and we went up against Larry Bird, but we got the franchise and held it for about 11 years, then sold it to Michael Jordan because he was working with me running the management.”

The two men also got into politics and Johnson’s idea for a third party because neither Democrats nor Republicans are fulfilling the needs of Black Americans.

According to Johnson, Black voters and black people should have no permanent friends, no permanent enemies, just permanent interests. The CEO believes what has happened is Black people have become a permanent appendage for one party in a two-party system. As a result, Black people are stuck in a place where one party takes advantage of them, and the other uses them as a flaw.

“So I think politically if we were to look at ourselves as an independent entity with the ability to go left or right depending on our permanent interests, I think we’d have a heck of a lot more influence on things in the interest of our people,” Johnson said.

The two men also pointed out the need for Black men and women to build, accumulate, and pass on wealth. Johnson is helping Black workers move their 401(k) assets from one employer plan to another without taking a loss, thus reducing premature cash-outs, preserving retirement savings, and improving financial well-being.

Retirement Clearinghouse, LLC (RCH), one of the firms owned by RLJ Cos., is teaming up with Fidelity, Vanguard, and Alight Solutions—three of the nation’s largest 401(k) record keepers—to establish a consortium called Portability Services Network (PSN). It aims to accelerate the nationwide adoption of auto portability to help America’s underserved workers enhance their retirement finances.

Vanguard and Fidelity have signed on to the project, which could generate $191 billion in retirement savings for 20 million Black workers over a generation. which can help Black people pay for their children’s college tuition, buy a home and more.

According to Johnson, the plan will also impact the behavior of Black men and women when it comes to  saving and buying stocks and bonds or just financial management, “because once you know you got something and you can save it you figure hey that’s how they do it so that’s how I’m going to do it.”