Betsy DeVos Says She Wants to Protect Student Borrowers, Then Freezes Rules That Protect Them 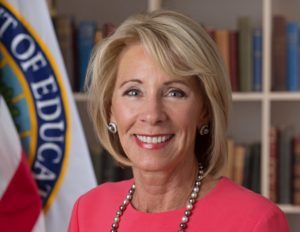 Secretary of Education Betsy DeVos and the U.S. Department of Education are being sued by 18 state attorneys general and the District of Columbia, because of her decision to freeze rules negotiated by the Obama administration that were to take effect July 1.

Although DeVos has said it is her intent to protect students, it seems that she also wants to make rules that are more palatable to the for-profit industry.

“It’s time to take a step back and make sure these rules achieve their purpose: helping harmed students,” DeVos is quoted as saying in a post on Forbes.com. “It’s time for a regulatory reset. It is the department’s aim, and this administration’s commitment, to protect students from predatory practices while also providing clear, fair, and balanced rules for colleges and universities to follow.”

One thing I’d love to see the Department of Education do: Stop the flow of federal loan money that sustains these predatory schools in the first place. But something tells me that won’t be part of its “regulatory reset.”

Here’s an excerpt from The New York Times that discusses the lawsuits:

Democratic attorneys general from 18 states and the District of Columbia filed a lawsuit on Thursday against the Education Department and its secretary, Betsy DeVos, challenging the department’s move last month to freeze new rules for erasing the federal loan debt of student borrowers who were cheated by colleges that acted fraudulently.

The rules, known as borrower defense, were finalized in October by the Obama administration after years of negotiation and review, and they had been scheduled to take effect on July 1. But after President Trump took office, Ms. DeVos paused the planned changes, citing a federal lawsuit filed in May by an association of for-profit colleges in California that is seeking to block the rules.

Ms. DeVos also criticized the rules, calling them “a muddled process that’s unfair to students and schools,” and she said she would establish a new rule-making committee to reconsider the matter from scratch.

In their lawsuit, filed in Federal District Court in Washington, the states called the agency’s rationale for the delay—the California lawsuit—a “mere pretext” for repealing and replacing rules that had already been finalized. The states are seeking to have the rules restored.

“Since day one, Secretary DeVos has sided with for-profit school executives against students and families drowning in unaffordable student loans,” said Maura Healey, the Massachusetts attorney general, who led the multistate coalition. “Her decision to cancel vital protections for students and taxpayers is a betrayal of her office’s responsibility and a violation of federal law.”

A spokeswoman for the Education Department declined to comment directly after the lawsuit was filed, saying that the department’s lawyers were reviewing it.

Also on Thursday, two student borrowers sued the Education Department in the same federal court over the delayed rules.

The students both attended the New England Institute of Art in Brookline, Mass., a for-profit school that stopped enrolling new students in 2015.