Want To Do Better in School? Then Exercise! 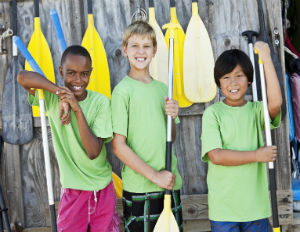 If you’d like your kids to do better in school, make sure they exercise.

According to an international group of experts, physical activityÂ is an investment in academic achievement as well as physical well-being, reports the Los Angeles Times. In addition,Â other study results show that exercise can reduce symptoms of ADHD.

Clearly being physically active is important.

“Physical activity before, during, and after school promotes scholastic performance in children and youth,â€ says a newÂ consensus statementÂ published in June in the British Journal of Sports Medicine.Â The experts also found that exercise and fitness “are beneficial to brain structure, brain function, and cognitionâ€–and you thought exercise conferred only physical benefits.

The group of experts, which was comprised of 24 researchers from the United States, Canada, and Europe, pored over the latest scientific and medical research on the benefits of exercise in kids ages six to 18. The experts gathered in CopenhagenÂ in spring of this year to assess the value of all kinds of exercise, including recess and physical education classes in school, organized youth sports leagues, and old-fashioned outdoor play.Â The consensus statement says that even a single break for moderate-intensity exercise can boost “brain function, cognition, and scholastic performance.â€

Interestingly, the experts in Copenhagen also found that there were extensive psychological and social benefits toÂ kids who have a regular exercise routine. According to the Los Angeles Times, exercise helps to clear their heads, helps them make friends, and helps them feel more confident around their peers, coaches, and other adults.Â Goal-oriented activities provide even more benefits, the experts found. They promote “life skillsâ€ and “core valuesâ€ like respect and social responsibility.

In a way, the conclusions of the group in Copenhagen complement the results of other studies, which have shown exercise to be effective in combating symptoms of ADHD in children.Â As reported in the Atlantic, “The number of prescriptions [for ADHD medications] increased from 34.8 to 48.4 million between 2007 and 2011 alone. The pharmaceutical market around the disorder has grown to several billion dollars in recent years while school exercise initiatives have enjoyed no such spoils of entrepreneurialism.â€Â Yet, exercise has been shownÂ to be extremely effective in reducing symptoms. It also improves mood as well as cognitive performance, memory, and mental focus.Â One expert argues in a TEDx Talk that exercise is actually for our brains.Â I’m not sure about you, but I’d much rather have my kid swimming every day than taking a pharmaceutical drug.

It’s summer–and to combat summer learning loss, you need to make sure your kids are reading, doing puzzles, and exercising their math skills.Â But if you want them to excel in school next year, make sure they’re running, jumping, and swimming too.

Robin White Goode writes about all things education for the Black Enterprise BE Smart platform, an education-focused initiative. Follow her on Twitter: @RobinWhiteGoode