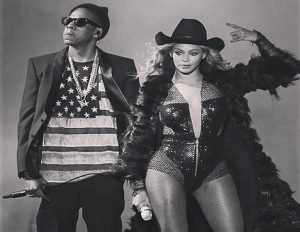 Despite divorce rumors and struggling tour sales making tabloid headlines, it looks as though the Carter bank accounts are still reigning supreme in the music industry, as the couple’s highly anticipated tour is expected to gross more thanÂ $100 million in ticket sales.

According to Billboard’s interview with Omar Al-Joulani, VP of North American touring for Live Nation and the promoter of the tour, the music couple’s “On the Run” tour will top at more than 850,000 in attendance, with ticket sales being sold at more than a 90% capacity rate.

“These shows sold tremendously well at the end, so we were able to sell-up limited-view and clean up production holds or other holds,” Al- Joulani said in response to early tour rumors of problems with ticket sales. “It was a very successful tour and we’re pleased to have that big gross number in the end.”

“On the Run” will wrap it’s 19-city North American tour tonight in San Francisco, with plans to pick back up on Sept. 12-13 in Paris, with those two shows being recorded for an HBO special.

“We’re on track to sell out both shows,” Al-Joulani says in regard to the Paris tour stop.

Looks like a few tabloid headlines and rumored insights of marital woes won’t get in the way of the Carter family’s music domination.