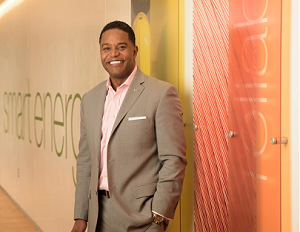 As an attorney and skilled lobbyist, Calvin Butler’s journey to CEO of Baltimore Gas and Electric Co. (BGE) is far from typical.

After graduating with his Juris Doctor degree from Washington University School of Law in St. Louis, Butler took a position with Central Illinois Light Co. working in its government affairs, legal and strategy departments. From there he joined print, digital, and supply chains solutions company RR Donnelley before joining BGE’s Chicago-based parent company Exelon in 2008. After successfully helping the company merge with Baltimore-based Constellation Energy Group in 2011, Butler was appointed senior vice president of legislation and external affairs in December 2012 before stepping into his role as CEO of the company in March 2014.

Now, as head of theÂ $1.8 billion energy company, Butler is making his mark as BGE’s first African American CEO. With the company’s 200th anniversary approaching in June, the St. Louis native explains his plan for moving the company forward while holding on to its rich history.

What are some of the changes you’ve noticed in the industry?

I saw tech and how it met customer needs and how we have to change to meet their needs not only today, but for tomorrow. We are also connecting with the community, going into the neighborhoods and school systems and reaching out to men and women of all races, but particularly minority communities, and saying we know what is important to you.

We also just entered a partnership with a tech solar company owned by Ray Lewis called Power 52, to build a solar facility that will benefit low-income communities.

What career development programs does BGE offer to help its employees?

We see that we have to develop the next generation of leaders because we are only going to be as good as the people of the company. We employ about 30 interns on an annual basis and the majority of those are engineers and we hire roughly 20% of our interns. We are also building mentoring relationships with high school students.

What is BGE doing to increase the pipeline of minority engineers?

The biggest piece of this is really going out and recruiting those young engineers early at Morgan State University, which is the No.1 HBCU engineering school and making sure they want to come here and work. We also look at our leadership teams. One of the things these young people have to have is people they can look up to in the corporate ladder and see that they have potential to move up.

We also implement and engage our employee base with employee resource groups where they focus on retaining our diverse talent. Diversity is important, but it’s that inclusive environment that you create in a workforce to ensure that your voice is heard and you are valued. I always say we are better when we bring different thoughts, values, and ideas to the table.