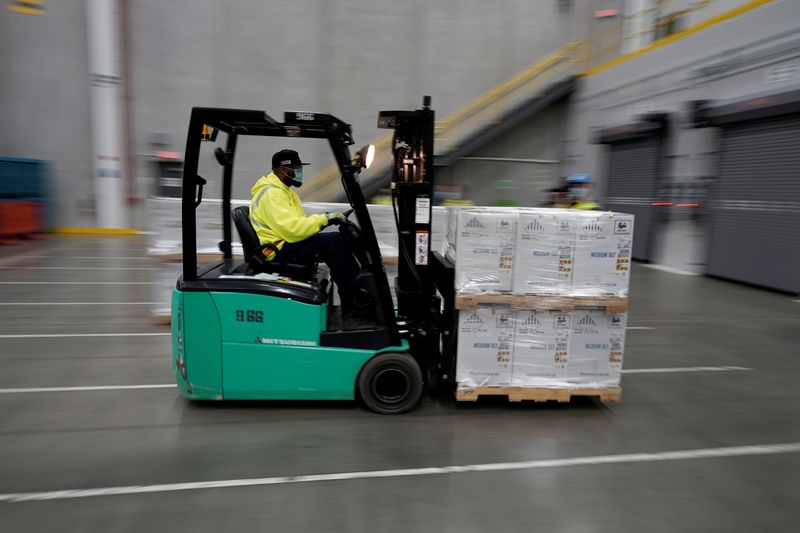 (Reuters) – President Joe Biden heads to Kalamazoo, Michigan, on Friday to visit the Pfizer Inc manufacturing plant that is churning out COVID-19 vaccines, as state and local governments across the country clamor for more.

Biden is due to tour Pfizer’s largest manufacturing site and its only facility in the United States making the COVID-19 vaccine at a time when less than 15% of the U.S. population is vaccinated.

The United States has rolled out ambitious vaccination programs in recent weeks that include large sites capable of putting shots into thousands of arms daily, as well as hospitals and pharmacies. But officials are begging for more doses.

The Biden administration has been working to increase the number of doses it sends out to states, cities and pharmacies every week, but Dr. Anthony Fauci, Biden’s top medical adviser, said on Tuesday that demand far outpaced supply at the moment.

The White House said earlier this month it was using the Defense Production Act to help Pfizer get additional equipment fast so that it could keep ramping up production. Biden is expected to discuss that initiative – which officials say is starting to pay dividends – with Pfizer executives during his tour.

Pfizer has not yet delivered to the European Union about 10 million COVID-19 vaccine doses that were due in December, EU officials told Reuters.

Jeff Williams, mayor of Arlington, Texas, who met with Biden and Treasury Secretary Janet Yellen in recent weeks, said his city of 400,000 was ready to vaccinate 40,000 people a day but only had enough supply to administer 3,000 doses.

Pfizer is under contract to supply the United States with 300 million doses of the two-dose vaccine it developed with Germany’s BioNTech SE.

As of the end of January, Pfizer had supplied the U.S. government with about 29 million doses of the vaccine. That is about as many doses that had been used by Wednesday, according to U.S. Centers for Disease Control and Prevention data.

Moderna Inc, which is also producing COVID-19 vaccine domestically, has agreed to supply the United States with 300 million doses of its own two-dose vaccine by the end of July.

Biden told a CNN town hall on Tuesday that everyone who wanted a vaccine should be able to get one by July, but said the recovery from the pandemic that has killed more than 485,000 people in the United States would still take many months.

Globally, Pfizer and BioNTech aim to make 2 billion doses of the COVID-19 vaccine this year. Pfizer’s chief financial officer told Reuters earlier this month that it had recently doubled the size of the batches of its vaccine and increased the number of batches it was producing.

Pfizer is one of the largest employers in the Kalamazoo area, a Democratic-leaning county in the electoral battleground state, which Biden carried in the November election.