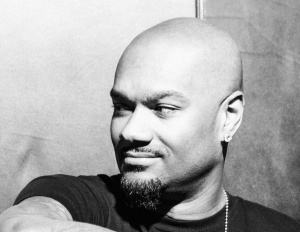 The Bronx, New York: Home of the greatest sports franchise, the New York Yankees and also the place that birthed hip-hop. More than likely, growing up in the ’80s, a New York kid had dreams of being involved in the business of hip-hop and or sports. The environment provided kids with the opportunity to use whatever talents they thought they had and seeing people like Kool Herc and Grandmaster Flash succeed in music, and listening to the sounds of KRS-One, gave a lot of kids from the Bronx, the hope to “make it big.”

Darian “Big Tigger” Morgan, Bronx native, Truman High School graduate, was one of those kids. The lure of success in the hip-hop game led him to participating in several aspects of the culture, including rapping, break dancing and, of course, DJing. As an intern at Washington D.C.’s WPCG 95.5, the Big Tigger brand was just formulating, success was within reach. Twenty years later, Big Tigger is STILL here, still building and it may take another 20 years for him to slow down.

BlackEnterprise.com spoke to the radio personality from Atlanta’s V-103 FM, who can be heard weekdays from 2 p.m. to 6 p.m. EST. He discussed the business of his brand, how he got his start and why he doesn’t “want no issues with the MOUSE!”

BlackEnterprise.com: You’ve been in the game for a number of years now, being successful in the radio and TV arenas, what prompted you to make this your career? Was this something you set out to do?

I kinda fell into this career. I grew up in the Bronx rapping, djing, beatboxing, breakdancing, etc … Basically anything that had to do with hip-hop. As an intern at WPGC 95.5 in DC during college, I fell in love with the promise of being a radio/TV personality. It allowed me to be close to music that I loved, as well as make an impact on the community. I had no idea I would be in this field until I was an intern. I was a social psych and accounting double major at University of Maryland. Once exposed to the inner workings of the radio station and experiencing the intoxicating feeling of being on air, it was a wrap!

Being a personality and being recognized every way you go, how do you handle the “pressure” of being “Big Tigger” when you are out and about? Do you always have to keep your “game face'” on when interacting with people, even in your own free time?

When I don’t wanna be bothered with people, I stay in the house. As a public person, sometimes the fans/audience that loves and supports you have no sympathy or compassion for the fact that you might have already taken 200+ pictures, or that you haven’t eaten all day, or that you have a headache … They just know they didn’t get their autograph or pic. So when I don’t wanna be bothered, I don’t go out. I normally love taking pics or signing things and try to accommodate any and all that ask. Additionally, as a role model, I’m always conscious of everything I do and say in public.

If you were told you could only hold one position between being a radio host and a TV host, which would you choose and why?

Almost impossible to choose because they offer different feelings, platforms and opportunities. A live, interactive radio show simulcast on TV would be the best option to me Ã  la Howard Stern or a nighttime talk show Ã  la Arsenio.

Let’s talk about the business of Big Tigger, how do you manage to control your brand in terms of making the right decisions so that Big Tigger can continue to flourish?

I’ve been lucky and blessed to have common sense, an awesome manager/attorney/best friend in Jason Riley, and God’s blessings. I’ve tried only to attach myself to and do things that were not only authentic to me, but of quality. Maintaining, protecting, and improving my brand have always been paramount.

You were the five-year resident DJ for the Washington Wizards, currently the official DJ of the Atlanta Hawks, still an official CirocBoyz DJ and member of the Monster DJs, how do your DJ gigs get incorporated with other businesses that may utilize your services? Example, are there ever any conflicts with a venue being sponsored by, let’s say, Grey Goose, yet, wants to hire you as a CirocBoyz DJ?

I was also the first member of the Core DJs. There are some opportunities where being attached to brands such as the NBA, Monster, & Ciroc has allowed my participation in certain lucrative and amazing situations, and has also excluded me from some awesome opportunities as well due to affiliations. As with most things, you take the good with the bad. Ultimately, I’m happy and proud that companies see the value in Big Tigger and have decided to let me represent their brands.

Among your hosting duties and radio appearances, you are also a DJ. You’ve also been featured as a rapper on several tracks with known artists. What else is in the Big Tigger bag of tricks? Are there any other opportunities you are planning to embark on in the future or is there anything in the works that you’d like to talk about?

I have had my own brand of Cognac (Grand Lenare Cognac) and my own line of aftermarket wheels (BT Wheels). I recently shot my first movie “Where’s the Love,” that aired on UPTV. Definitely planning on some more acting very soon. Behind the camera, I’m co-producing a documentary that I feel will be one of my best accomplishments yet. I’m always looking for and entertaining entrepreneurial ideas … Don’t wanna work forever! I’ve also been doing free music podcasting for two-and-a-half years now and have accrued 3.3 million-plus downloads of my 56 different podcasts. I’ve used it as another platform to reach consumers and offer companies an opportunity to reach them as well! They’re available on iTunes for free by typing BT Radio in the search or going to bigtiggershow.podomatic.com!

You’ve been involved in charitable functions, including, for nine years, Big Tigger’s Annual Celebrity Classic, what prompted you to start doing the event and are you still involved with any charities? Is there anything planned in the future for any causes?

I first began doing them as a fun way to give back to the community that supported me in all my endeavors. It turned into an annual celebration of life and the struggle to increase the awareness of HIV/AIDS through education and testing. I’ve had many superstars graciously lend their time and talents to my foundation and cause over the years like Alicia Keys, Kevin Durant, Mike Vick, R. Kelly, Nick Cannon, Vince Carter, Trey Songz, Gabrielle Union, Ludacris, and more. The plan is to bring it to Atlanta in 2015 or as soon as I can find some funding and a director for my new foundation, The Big Tigger Foundation. The new foundation will have a broader reach as it will encompass the betterment of children’s lives thru education, nutrition, physical fitness, as well as HIV/AIDS prevention.

What goal have you set for yourself, that you haven’t accomplished, if any, that you look forward to doing and when do you think you will complete it?

I’m looking forward to getting married and having a lil Tigger!! Aside from that, I think I wanna do something for ESPN or TNT. I think I’d bring a fresh perspective on sports and will represent a personality that most sports figures will feel comfortable talking to and relating to. Ultimately, 20 years later in radio and 17 years later in TV, I just want to continue representing and resembling what some have called a “legendary” career.

Has Disney ever had a problem with you using Big Tigger as your moniker?

Not that I know of. Yet another reason I had to stay keep my image clean! Don’t want no issues with the MOUSE!! lol