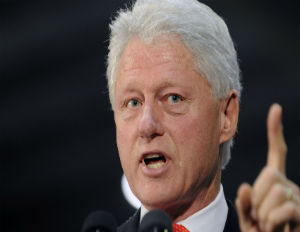 Former President Bill Clinton was confronted by Black Lives Matter activists during a rally for his wife in Philadelphia on Thursday night.

As reported by NBC, activists held signs adorned with phrases such as, “Clinton Crime Bill destroyed our communities,” and “Clinton $16 billion for prison grants and police expansion.”

Clinton did not take too kindly to the activists’ signs, as he launched into a 10 minute defense of his 1994 crime bill. “We had 13-year-old kids planning their own funerals. She [the protester] doesn’t want to hear any of that. You know what else she doesn’t want to hear? Because of that bill we had a 25-year low in crime, a 33-year low in the murder rate, and — listen to this — because of that and the background check law, a 40 year low in the deaths of people from gun violence and who do you think those lives were?”

But it was the sign that read, “Black youth are not superpredators” that seemed to offend Clinton the most.

The sign referred to Hillary Clinton’s infamous speech on her husband’s 1994 crime bill, in which she compared urban youth to “superpredators” that “must be brought to heel.” Her comments ignited the wrath of Twitter users, who responded with the viral hashtag, #WhichHillary.

It’s safe to say Clinton’s comments are not going over well with the folks on Twitter.

Here are a few highlights:

Bill Clinton dismissed both the impact of the crime bill & doubled down on defending language that even Hillary has distanced herself from.

Yesterday was not a gaffe for Bill Clinton. He was confident, clear, and fully articulate. He said what he meant and meant what he said.