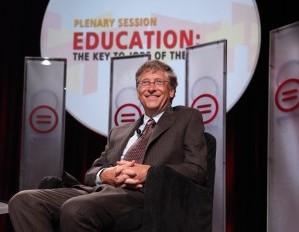 The October issue of BLACK ENTERPRISE features an exclusive interview with Bill Gates, co-chair and trustee of the Bill & Melinda Gates Foundation. Here we feature excerpts of an unpublished conversation on the role education plays in innovation.

You hear the president talk a lot about we need, the United States needs, to start innovating again and about these products or services that, globally are in demand. Is it really down to education?

Bill Gates: Education is the key thing that other people have done to catch up to us.Â  They looked at what we did well, our university systems, our research grants, and they copied the good parts.Â  And unfortunately they didn’t copy the bad parts.Â  They didn’t copy the idea of not giving teachers feedback.Â  That part they changed. Yes, if you had to change one thing in America to make us more competitive you would change the education system.Â  That’s at the heart of this whole thing.

Whether you are looking at it from a country point of view, from an individual point of view, from a racial equity point of view, you’ll just keep coming back to education.Â  You’ll say, but why are the inner city schools so bad?Â  So bad compared to suburban, so bad compared to other countries, what’s going on there? You might think, well, maybe it’s something inherent about the inner city or kids of low income parents.Â  In fact, the big breakthrough was to see that through these charter schools that’s not the case at all.Â  Spending less money per student than the high schools that can easily be labeled “drop out factoriesâ€ the charters…the good charters…the KIPP, and YES, ASPIRE, are getting 95 percent of their kids going to four-year colleges.

Who do you see as the innovators?Â  Who are the three people who are out there right now that you would say; these people are really innovative?

Gates: Well, building a new personnel system isn’t your sort of classic, you know, one brilliant idea.Â  Somebody wakes up in the morning and says; I’ve got it.Â  It’s blocking and tackling.Â  Okay, let’s get these cameras in the classrooms.Â  Let’s analyze the videos. So I’d say that the people running the school district in Pittsburgh, which is a pilot location, in Memphis that’s pilot location, Hillsboro, Florida, I’d give the both the superintendent, but also the teachers a lot of credit for being innovators and proving out that system.

The state of Colorado has passed a law where they are doing merit-based evaluation of their teachers.Â  They are taking that very, very seriously. On the technology front it’s easier to come up with a person, like Sal Khan, is wonderful.Â  I got to bring him on to the stage at a conference called TED.Â  There is a wonderful URL that you can just go up and look at Sal talking about his work.Â  He’s an innovator. The people who run charter schools are absolutely innovators.Â  I mean they are phenomenal innovators because to start a charter is so much work.Â  They don’t give you a building.Â  They don’t reimburse you.Â  The first year is very difficult.Â  It’s amazing that people persevere.

Geoffrey Canada is, I think, one of the great innovators.Â  What he’s done at Harlem’s Children’s Home to create something that includes an amazing school, but also sub-services to kind of reach out to the community as a whole and draw them in, that’s entrepreneurship.Â  It’s certainly innovative.