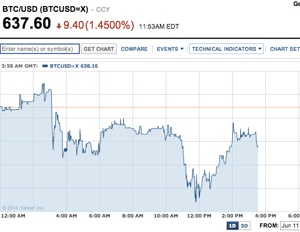 Bitcoin's volatile value has been on the upswing over the last few weeks. (Image credit: Yahoo! Finance)

If you still think Bitcoin is a get-rich-quick scheme, you may be right. But one major finance site thinks there’s more to it than hype.

Yahoo! Finance has decided to include the price of bitcoin on its site, aiding in the translating of the virtual currency into fiat currency, specifically to U.S. dollars (USD). The company’s inclusion of BTC/USD prices comes just weeks after Bloomberg decided to incorporate bitcoin in its terminal.

Bitcoin has been on a tear over the past few weeks, with prices reaching just over $660 for a single bitcoin in the last few days.

Of course, the currency has seen better days in the past, with prices soaring over $1,000 in December of 2013.

More and more businesses and institutions have begun to accept bitcoin as of late. Satellite television provider Dish Network has decided to accept bitcoins as payment for its services, although it will convert the virtual currency into U.S. dollars.