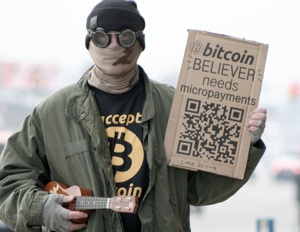 Bitcoin miners often use high-powered machines or many low-power ones to generate bitcoins. (Image credit: Scottks)

In an unprecedented move, a single group of bitcoin miners was in control of the economic stability of the virtual currency for multiple stretches of time, according to Ars Technica.

GHash, the self-proclaimed leading bitcoin mining pool, was able to create more than 51% of the total cryptographic hashing output, the method by which bitcoins are created.

Anyone can begin mining bitcoins themselves, though often the cost of electricity spent mining the bitcoins outweighs the value extracted from them.

To provide more than half of the computational power for bitcoin creation is no easy feat, but the accomplishment isn’t without its detractors. For a single group to have majority control over an entire currency bodes ill for its longevity and decentralized nature.

A user or group with majority control over bitcoins has the power to spend bitcoins twice, increase transaction fees for all users, or deny competing miners’ transactions.

GHash did promise to never breach the 51% threshold, going so far as to release a press release pertaining to the issue. But the mining pool has already been in hot water before, using its considerable mining percentage to allegedly double-bet in bitcoin gambling site BetCoin.