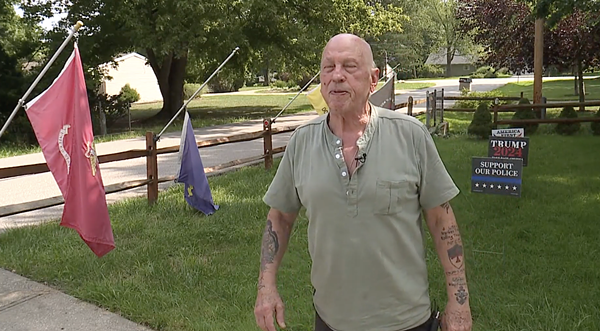 A Black Amazon delivery driver who peeped a racist sign on the lawn of a Trump supporter took action and ripped the offensive sign that read “Black Liars Murder” out of the ground and threw it.

According to Clevescene.com, the homeowner, a white man only identified as being from Parma, OH, is upset because of what the  Amazon driver did.

The Parma Man stated, “I’m afraid. I’m an old guy. I can’t run. I said, ‘I don’t want to discuss this.’ You know, he’s a stranger. He just mocked me and called me a coward and held up the packages he was supposed to deliver.”

“Every campaign season there are some signs that come up missing, but this wasn’t a political sign. This guy is making his statement for whatever his beliefs are. Now, it’s obviously up to interpretation, but you’re always going to have somebody who is going to push the envelope,” Ciryak said.

“I’m sure it’s offensive to some people and not offensive to others. But if they find something offensive, call the police. We can go out there and talk to the residents, the building department and law department to find out if it is crossing that line. Obviously, people have their First Amendment right, but regardless of the sign that’s up there, you can’t just walk up if you disagree with it and rip it out of somebody’s yard. You have to respect other people’s property and their political views as well.”

Amazon has stated that it is also starting an investigation into the matter.

“Hate, racism, or discrimination have no place in our society and are certainly not tolerated by Amazon. However, the behavior in the video does not reflect the high standards we have for our drivers; we will investigate internally and appropriate action will be taken if needed.”