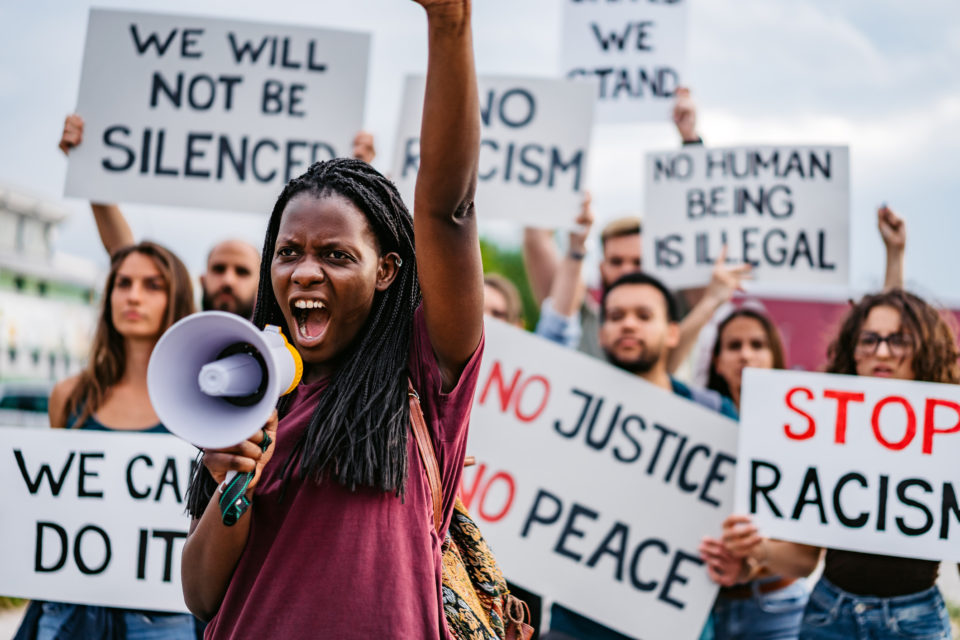 People with placards and posters on global strike against racism. Woman speaking in megaphone in front of crowd. (IStock)

On May 29, 2020, a Black George Floyd protester was body-slammed by an Atlanta officer for trying to enter her car and leave the scene peacefully—now, she is in the process of suing the city.

Amber Jackson’s car was behind a policeman’s barricade at Lenox Square Mall, which she moved to gain access to it. However, APD officer Cody Swanger saw her actions as disorderly conduct, and threw the 24-year-old to the ground, Fox 5 Atlanta reported.

Last Friday,  it was revealed at a press conference that Jackson and her attorneys have filed a lawsuit over the incident.

The incident was recorded and has gone viral, with Attorney Mawuli Davis saying Jackson and her boyfriend “weren’t there to loot. They were there to protest. They were trying to leave the area and that’s why Amber moved the barricade.”

On Friday, Jackson had surgery for her broken collarbone, more specifically on her clavicle, from the incident.

In the video released by the APD, an officer could be heard calling Jackson “stupid” for refusing to listen to the officer’s order in exiting her car.

However, some, like Heather Upham, who recorded the incident, say at the scene that Jackson was complying with the orders

“I did hear them tell her to get out of the car. They appeared to be cooperating as far as I could tell,” Upham, said.

“As we stated when we filed the lawsuit in the death of 8-year-old Secoriea Turner earlier this month, June will be a month of reckoning for the city of Atlanta. The brutal actions of this officer severely injured Ms. Jackson,” Davis said.

Police officer  Swanger has been since on paid administrative leave since last year, with the outcome of an investigation determining his employment pending.