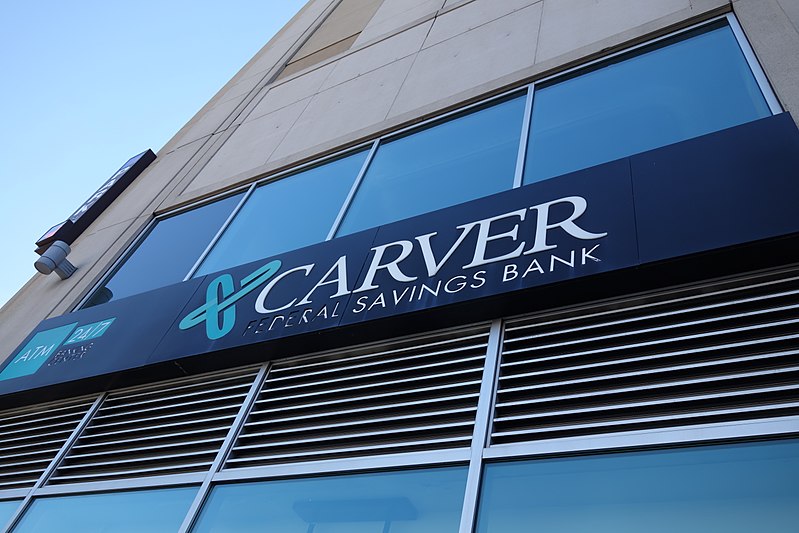 The Carver Federal Savings Bank within the One Jamaica Center in Jamaica, Queens, NY. (Wikimedia Commons)

On Tuesday, Oct. 22, the House Financial Services Committee, chaired by Maxine Waters (D-CA), will hold a hearing on “The Decline of Minority Depository Institutions and the Impact on Underserved Communities.” The hearing follows a number of failed legal and regulatory initiatives designed to preserve the number of black banks.

An objective review of 308 leads to the conclusion that banking regulators, the Fed, in particular, failed to follow the law. There were 55 black-owned banks and thrifts in 1994. By 2016, there were just 23. Twenty-four remain today. Fifteen of the largest black banks can be found on BLACK ENTERPRISE’s BE BANKS List.

There have been other regulatory failures. Section 342 of Dodd-Frank Wall Street Reform and Consumer Protection Act requires nearly 30 agencies, including the Federal Reserve, the Treasury Department, and the Federal Deposit Insurance Corp., to establish offices of minority and women inclusion to monitor diversity within the agencies and in the ranks and the pool of contractors who provide goods and services to them. One would think this would help black banks. It did not.

Banking regulators have recently attempted to cover up their history of neglect. On Sept. 26, 2019, the Federal Reserve Bank of Kansas City held a seminar on Minorities in Banking, 22 years after I gave a talk there (in November 1994) on “The Role of Minority-Owned Banks in Meeting Credit Needs in the Marketplace.” Unfortunately, my talk did not help the Fed preserve black banks. As they exist now, black banks are too small and too weak to make a difference.

At the Kansas City Fed in 1994, I suggested the Fed’s Federal Open Market Committee (FOMC) purchase mortgage-backed securities (MBS) originated by black banks as part of open market operations. The Fed, then under Alan Greenspan, declined, saying that only Treasury securities were appropriate collateral. Since the financial crisis, the Fed has purchased trillions in securities, helping white-owned banks, broker-dealers, insurance companies auto companies, and investment banks. Not only did few black banks receive any assistance, but the ones that did were the wrong banks.

We still believe one possible solution to the black banking crisis is to have the FOMC create a black bank liquidity pool totaling at least $50 billion by conducting repo and reverse repo transactions, purchasing Treasury, MBS securities (and/or SBA loans) from black banks with a record of actually making loans to the black community.

With a little federal help, black banks might be able to grow and get stronger. In this way, they may be able to finally help small businesses and would-be homeowners realize their dreams, as one black bank in New York City, Carver Federal (No. 3 on the BE BANKS list with $590 million in assets), tried to do after the financial crisis:

Of course, there are bound to be problems with this approach. For example, black banks would have an incentive under this program to purchase home mortgage and small business loans from white-owned banks and simply stamp their label on them. Fortunately, technology allows us to look through the securities to reveal the origination process and path. Any pools that consist to loans purchased from white-owned banks for purposes of participating in the Fed black bank program should be rejected, with one exception: loans originated by entities with a track record of actually helping the community, in the model of ACORN (the Association of Community Organizations for Reform Now). And black banks that do not have a history of making loans to the black community or have demonstrated questionable banking practices should be prohibited from participating in this type of FOMC program.

Even with these potential problems, I believe the effort would be worthwhile, not only for black banks but also for the country as a whole.

William Michael Cunningham, founder of Creative Investment Research, is an economist, blockchain, and impact investing specialist. He is highly skilled in Environmental, Social and Governance (ESG) and corporate social responsibility (CSR) analysis. He received his MBA in Finance and a Masters in Economics from The University of Chicago. Mr. Cunningham is on the faculty at Georgetown University.