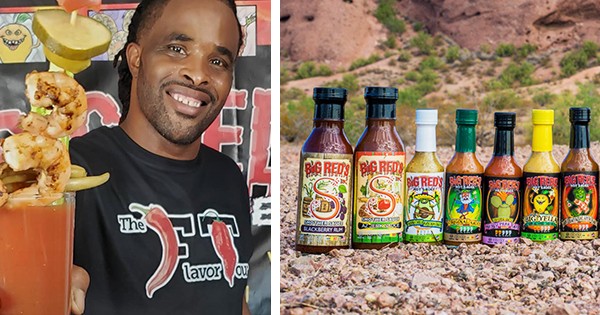 Paul Ford and his wife, Tasia, the owners of Big Red’s Hot Sauce have always been known for bringing the full flavor of hot sauces with the heat you love! With over 11 different sauces and growing, they are known for creating some of the best sauces you’ll ever taste.

The couple was on their way to make waves with their 12 state “Flavor Tour.”  This tour included hot sauces expos and competitions to spread the name of Big Red’s Hot Sauce across states such as New York, North Carolina, Oregon, California, and New Mexico just to name a few.

This tour alone was set to take Big Red’s Hot Sauce to the next level. Then the pandemic hit, and the primarily customer-facing business was threatened. However, Paul had other plans and quickly pivoted to change the scope of the business. As a manufacturer, he saw opportunities to help not just his business, but others like his own. He was able to use his manufacturing skills and knowledge and equipment to create a new revenue stream.

With the funds he earned, he invested in marketing to increase online orders. He even caught the attention of hip-hop mogul Master P and appeared on Master P Reviews where he received high praises for his sauces – particularly the Blackberry Rum Smother sauce and his Sweet and Spicy Prickly Pear Almonds. From that point forward, Paul began working around the clock and refused to take “no” for an answer.

For this reason, he was nominated and selected to take part in the Forbes Next 1000 list that was created for entrepreneurs that have shown resilience in the face of uncertainty. He was selected by an A-list panel of judges including Asahi Pompey, Reid Hoffman, Alex Rodrigues, Russell Wilson, Ciara, Ayesha Curry, Carla Harris, and many more.

For more details and/or to taste for yourself all the flavors, visit the official website at BigRedsHotSauce.com