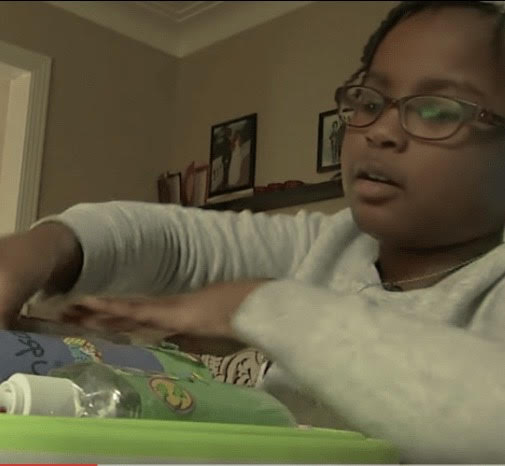 Two black elementary school students took home the first-place trophy at a national invention competition for their innovative and creative way to clean their hands.

Chicago second-graders Kailey McGuire and Jaiah Gosa partnered up to solve an issue McGuire noticed after playing in the sand at the beach, which was how to wash your hands without a bathroom around. “I had just finished playing in the sand but there was nowhere to wash my hands nearby,” McGuire told ABC 7 Chicago.

The Lenart Regional Gifted Center students soon created a blueprint and prototype for a portable sink that won first place at the school’s invention competition last year. After winning their school convention, the two students took their new invention to the regional level. Student inventors from across the Chicago region in grades K-8 competed for top honors at the 7th annual Chicago Student Invention Convention. The event was the culmination of a 10-week invention curriculum that was delivered to 3,500 students at 45 schools, according to chicagoinnovation.com.

At an event attended by more than 1,000 people at Illinois Institute of Technology’s Hermann Hall, finalists were identified to compete at the National Invention Convention and Entrepreneurship Expo, held at the Henry Ford Museum of American Innovation in Dearborn, Michigan. After winning at the regional level for grades kindergarten to second grade, the pair traveled to Detroit to compete in the National Invention Convention in which they also won.

“The kids did a really good job,” said Karin McGuire, Kailey’s mom. “It was really hard. They’re 7-year-olds staying focused for that long a period of time. So we had to have play breaks, food breaks, and a lot of patience.”

To make their concept a reality, the girls came up with three prototypes, documenting their extensive research in a binder. Finally, they designed a portable, collapsible sink that can be attached to a water bottle.

McGuire, now 8-years-old, is getting ready for another invention convention but this time, she stated, her invention will be in robotics.