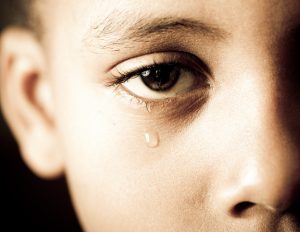 I remember well when I saw a friend get a beating. She and I, at about age 9, had left her home–to go where, I don’t remember–without asking her father. When we returned, he met us in the vestibule with a belt, which he proceeded to use on my friend.

“Why did you leave the house without asking me?â€ Wham! “Don’t ever do that again!â€ Down came the strap again. My poor friend dissolved into angry tears. I had never witnessed such a thing and was just about as traumatized as she was.

I went home and told my parents, who were incredulous that my friend’s father would behave like that in front of me. It was a sobering day. My friend ended up dying of cancer at the age of 27, and I’ve often wondered if the not-infrequent beatings she received contributed to her illness.

Stacey Patton, assistant professor of multimedia journalism at Morgan State University, has written a powerful essay in the New York Times that begins with a description of a beating, or whupping, as she calls it, she received as a child. It is a chilling read.

As Patton writes and as studies have shown, spanking–hitting a child with an open hand–isn’t discipline. Beating children with tree branches, belts, or other implements leads to worse outcomes for kids–not greater compliance. Patton connects the dots of beating children with white supremacy:

“It should not be surprising, then, that black American slaves, who endured the trauma of their own beatings, inherited their oppressors’ violence and, for centuries, passed down these parenting beliefs. This is one of the saddest untold stories in American history – the way in which the victims of racist oppression and violence have hurt the bodies of their own children in an effort to protect them from a hostile society.â€

She also notes that “Black children are also more at risk of being assaulted, seriously injured, or killed by a parent than by a police officer, a neighborhood watchman, or an irritated racist who hates rap music.â€

‘Thy rod and thy staff, they comfort me‘

I rarely hit my kids, but whenever I did, it was almost always in response to church teaching. I now completely reject that teaching and do not support inflicting physical pain on the bodies of growing children in order to get them to comply or to punish them for wrongdoing.

Punishment isn’t the same as discipline. As Ross Campbell points out in his book, How to Really Love Your Child, the “rodâ€ the Bible speaks of could be analogous to a shepherd’s staff, which is used to guide the sheep or keep the sheep from going the wrong way–it isn’t used to beat the sheep.