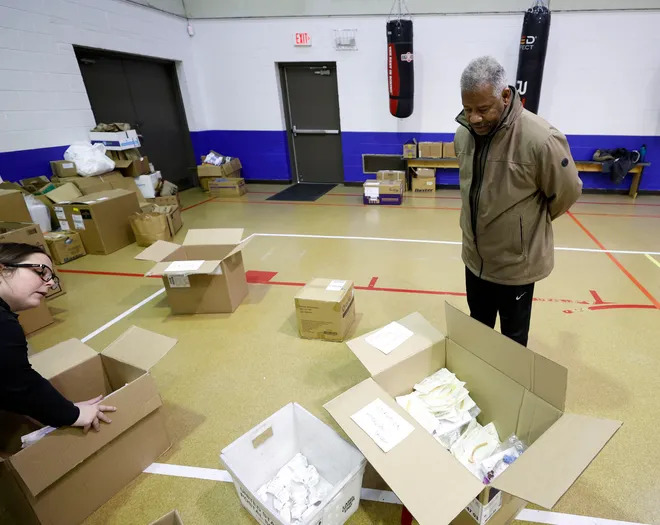 M. Dujon Johnson at the Ukrainian Cultural Center in Warren, MI, looking over medical supplies to take with him on his trip. (Photo: Eric Seals, Detroit Free Press)

A Black Detroit veteran who served with the Peace Corps Response in Ukraine from 2018 to 2019 is returning to the country to help fight alongside Ukrainian troops against the Russian invasion.

According to the Detroit Free Press, Johnson was anticipating flying into Krakow, Poland, on March 9 before crossing the border into Ukraine to meet up with groups in Cherkasy coordinating foreign fighters. Having served in the U.S. Army and in Germany, he expects to be issued a weapon.

Born and raised in Detroit, Johnson was once a high school dropout. Since then he has earned two law degrees and a doctorate. Although his family is “100% opposed” to him going to Ukraine, Johnson, a divorced father of six, is determined to continue his mission to bridge divides and promote peace.

“As an African American, we have a legacy, a history of standing for what is right,” Johnson said, noting that African Americans spoke out against 19th-century anti-Chinese immigration policies in the United States and against the anti-Semitism of Nazis during World War II.

BLACK ENTERPRISE previously reported discrimination of Black students who were racing to cross the border amid the Ukraine war. Some claimed they were forced to walk miles after not being allowed to board buses and trains.

“When people hear about Black Lives Matter and voting rights, they think it’s just for Black folks, but we’ve always stood up for what’s right for all people,” Johnson said. “So I’m going there, because the concepts of democracy, freedom, being treated right, that’s just part of our legacy. And I feel compelled to uphold it.”

Johnson will be among other foreign volunteers who are hardly new to war. As of March 3, Ukrainian President Volodymyr Zelensky said that 16,000 foreigner fighters have volunteered, according to The Washington Post.