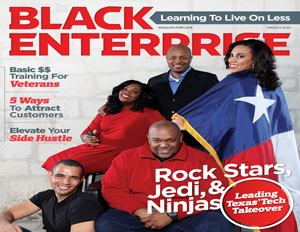 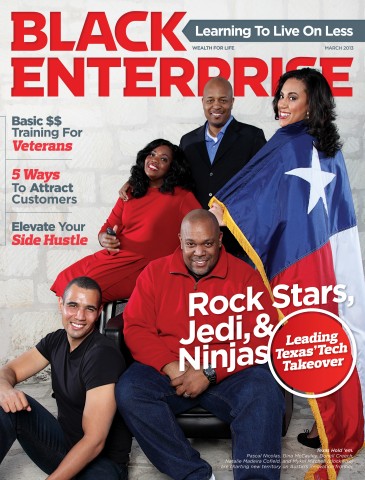 A ninja, a Jedi, and a rock star walk into a bar.

They take one look around and walk back out.

If you have no idea why ninjas and Jedis would be socializing, or pivoting, you’re probably clueless about the interactive software technology buzz across the country.

If the business news around Facebook, Instagram, and Groupon hasn’t clued you in yet, you need to be informed: We are living in unprecedented times in which entrepreneurs who have little or no money build empires out of thin air only to exit them 18 months later as millionaires. Or, they retain their equity and iterate, hoping to go down in Silicon Valley history as a legend on par with Steve Jobs or Mark Zuckerberg.

The only problem with that equation: African Americans don’t fit the mold. They don’t match the pattern. They’re not in the pipeline. They aren’t fundable. Or so “theyâ€ say.

Less than 1% of founders who receive venture capital are black. There is obviously a problem in the hi-tech software industry when there aren’t more black entrepreneurs with bankrolls.

But since 2010, that stat from CB Insights has been pounded into our brains over and over again until you start to wonder, “Aren’t there any successful black-owned and -operated tech companies?â€ You bet. And that’s what this article is all about: a celebration of the black tech renaissance.

Here we highlight a few digital mavens from the Bay Area to Brooklyn in industries as diverse as gaming, fashion, banking, and romance. Read on to see how they are shredding stereotypes with their nunchakus and light sabers.

In college, Benjamin Young started off in engineering but fell in love with computer science. He also started off weighing 175 pounds, but about seven years after graduating ballooned to 240. He shed the weight but retained his affinity for coding, which came in handy when he and his co-founders, Greg Coleman and Boomie Odumade, started Nexercise, an iPhone/Android app that encourages physical activity through competition, social support, and rewards both real and virtual. When the three partners saw that there was a market need, the former Wharton Business School classmates revisited the idea after graduation. Two years later, Nexercise’s 500,000 users are logging 700,000 minutes of physical activity per day.

Rated five stars in Apple’s app store, the app uses location-based technology, time stamps, and other digital inputs to analyze behavior and determine the best way to motivate individual users. It uses “experience pointsâ€ as a benchmark, not miles ran, minutes walked, or calories consumed. For example, users earn medals for aerobics on a rainy day, points for exercising with a buddy, or spot rewards just for using the app. The rewards are highly targeted advertising, and the Silver Spring, Maryland-based Nexercise gets paid by the companies to give them away. “We call it motivation in your pocket,â€ Young says.

Does technology kill relationships? Not so, says Zuhairah Scott Washington, 35, a Harvard-educated lawyer who founded Kahnoodle in 2011 to encourage sustainable relationships. The iPhone app (it can also be used on iPad and iPod) uses gamification to intrinsically motivate lovers to speak each other’s “love languages.â€ Her affiliate revenue business model has won pitch competitions with Distilled Intelligence and Focus 100.