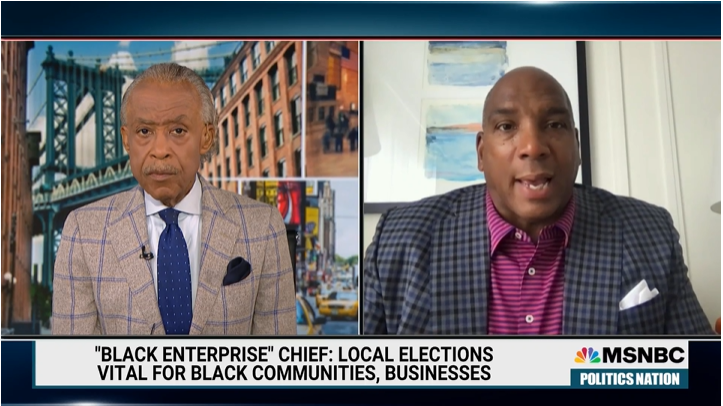 With just two months until the midterm elections, Black men and women across the country must be prepared to vote. Graves discussed the role Black media plays in educating Black people on candidates, their platforms, and which races are important.

“Black media has to be out informing our people about the importance of voting and why it’s so important because what is taking place in Georgia and Texas where they’re standing in the way of people getting out to vote will have an impact for dozens of years if we don’t come out in strong numbers,” the Black Enterprise CEO told Sharpton.

The two men also discussed environmental racism, climate change, and the fact that the city of Jackson, Mississippi is in its third week without water. Graves talked about how climate change disproportionately affects Black and Latin Americans.

“The environmental issues disproportionately impact Black and Brown communities and so we can’t just focus on things having to do with police violence or other things that we deem important, not that they’re not important, but we have to understand that all of these things when they vote against having EPA segments and restraints on things having to do with pollution, the aftermath of that is what you see in Jackson,” Graves said, adding that Black politicians have been warning Mississippi this would happen for at least a decade.

Sharpton concluded the segment by asking Graves how Black men and women participating in local elections can help the recovery of Black businesses, which fell by 40% at the beginning of the COVID-19 pandemic.

“We have to vote for those people who are going to take care of us and the reality is that’s not often been the case,” Graves said.

“Having Black politicians to represent us in local races, in midterm races, we need to see a population of politicians that is representative of the population in general and that’s not what we see. it is imperative that we get out and vote for people that look like us, that represent us and Black-owned media will play a substantial role in making sure that happens.”