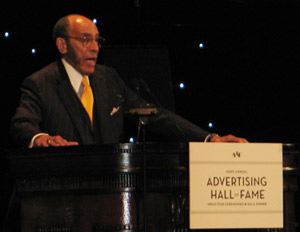 Mr. Graves addresses the crowd during his induction into the Advertising Hall of Fame

Last night, in the ballroom of New York’s Waldorf-Astoria Hotel, packed with the most prominent and powerful players in advertising, BLACK ENTERPRISE Publisher Earl G. Graves, Sr. was inducted into the Advertising Hall of Fame, receiving the industry’s highest honor. One of eight inductees, Graves joined the ranks of advertising pioneers and icons due to his contributions for raising the standards of advertising excellence by using BE as a platform to diversify images of African Americans in business and communicate the power of the black consumer market, Frank Cooper, senior vice president & chief consumer engagement officer for PepsiCo Americas Beverages and chairman of the American Advertising Federation, the leading industry trade association, said in his presentation of the award. He was also recognized for his major achievements in business, media, politics and philanthropy.

Another milestone was the AAF’s selection of comedian Bill Cosby, the first non-athlete black celebrity endorser, as the inaugural recipient of the President’s Award for his lifetime contributions to advertising.

In accepting the honor, Graves shared his challenges of gaining advertising when he started the publication more than 4o years ago because “some advertisers didn’t want to associate their products with black people.” He says he used the magazine as a vehicle to influence decision makers to realize the value of black consumers to the bottom line of major corporations. “For a long time, though, I couldn’t get others to see it. I’d get asked: ‘Where is this black business class?’ Today, African Americans are a coveted market that no savvy company would ignore. And African Americans are featured in global campaigns that target all audiences, ” he says. “What changed? Simple: Racism just got out of the way. I think it’s more than fair to say that BLACK ENTERPRISE played a central role in changing perceptions.â€

He also noted the vital role of Cosby, who pitched Coca-Cola, Jello Pudding and Crest toothpaste, played as one of the first African American personalities to be the center of a major national ad campaign in changing the perception of black participation in all aspects of American society . “He succeeded in that role because all Americans, regardless of race, felt that he represented them,” says Graves. “I have no doubt that there’s a direct line from the nation’s embrace of African Americans in advertising to its election of the first African American president of the United States.â€

Cosby, who appeared on the December 1981 cover of BLACK ENTERPRISE and was cited as the nation’s top star presenter in advertising, also discussed the value of media in breaking barriers. In fact, the veteran entertainer received his first commercial prior to becoming the first black actor of a dramatic series, I Spy, in 1965 when he called cigar manufacturer White Owl to serve as an endorser. In receiving his honor, he noted “that a lot of people had special meetingsâ€ about whether to put him on air and he recognized those who took a chance on him. Lacing his remarks with humorous asides, he discussed the need to “level the playing fieldâ€ for blacks in different arenas — he and his wife invested $1 million and convinced the company Service Merchandise to sponsor Willy T. Ribbs, the first African-American to qualify for the Indy 500, some 20 years ago — and how the media industry can still bring about significant cultural change.