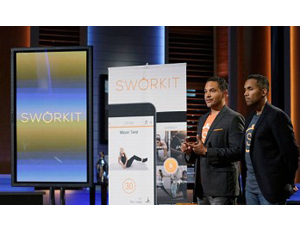 Benjamin Young, who was named Black Enterprise’s “Techpreneurâ€ of the year in 2015, will appear on tonight’s episode of Shark Tank,Â along with his business partner Gregory Coleman.

The pair is pitching their company, Nexercise, and their latest product Sworkit. It’s a free fitness app that offers custom workout routines.

The big differentiating factor between Sworkit and other fitness apps is “it’s highly customizable,â€ says Nexercise co-founder Coleman. “Not a lot has changed [with fitness] in the last 30 years. There’s lots of good content, but everything is static. I can’t do P9ox every day because I don’t do the same things every day. With Sworkit, I can get a great workout anytime, anywhere.â€

The app will tailor workouts based on what you are currently doing, for example, if you are traveling, in a hotel, in the office…etc. Workouts are customized based on the user’s likes.

Sworkit is being well-received. A recent University of Florida fitness research studyÂ recently scored Sworkit its highest score when compared to other fitness apps on the market.

The co-founders have combined experiences in software development and military training. Young spent years as a software developer; while Coleman’s background is in the military as an Air Force pilot. The two met while attending Wharton business school, pursuing their MBAs.

In an interview with Black Enterprise, Coleman explained the motivation for appearing on Shark Tank.

“[We’re not] in Silicon Valley, we are D.C.-based,â€ he said. “We look like a Silicon Valley company. Over the years, we always looked for other ways to kind of go out and figure out a unique path to success. We don’t necessarily fit the patterns. We are a little older–both in our early 40s; two African American guys, and we are on the East Coast. We have kind of an outsider sort of angle.â€

Nexercise was the first black-founded company to go through the Techstars’ accelerator program. Winning on Shark TankÂ would allow the company to “grow faster,â€ says Coleman. “[With] consumer-facing digital properties, speed is one of your most important things.â€ A win would also mean more capital to spend on marketing, according to Coleman.

About the experience of appearing on Shark Tank, Coleman said, “It was awesome. When you first get into the process you don’t get your hopes up high. Then we made it to the next round.â€ He said the experience was also “surrealâ€ since both he and Young have been fans of the show since it first aired.