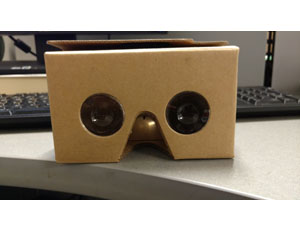 Pros: Great, affordable way for beginners to explore virtual reality. Many different models are available for purchase. More apps are becoming available for the device. Works on both Android and iPhones.

Cons: Some apps for it are not so great and will freeze a mobile device.

BlackEnterprise.com Review:Â
You will hear and read a lot about virtual reality in technology this year. Virtual reality is a computer-generated three-dimensional image or environment with which we interact. Facebook-owned Oculus VR is set to launch the Oculus headset and Sony, as well as other tech companies, are launching VR headsets soon. More VR content is being made since 360-degree video is becoming abundant–cameras such as the Nokia OXO can shoot high-definition 3D video. VR apps, displays, and content will all be at the forefront of tech coverage this year.

If you are just getting acquainted with virtual reality or want an affordable way to experience it, then you will want to know about Google Cardboard. Google sent Black Enterprise a number of Cardboard headsets to try out and we had a blast doing so in the office. Check out the video at the end of this article.

How It Works
Google Cardboard is not a new device–it was announced at Google I/O–Google’s annual conference in 2014. However, it has received an update since then and there are a lot more apps available to work with it.

Google Cardboard is made from a piece of cardboard cut into the shape, somewhat like a ViewMaster toy, and is comprised of two 45 mm focal length lenses, conductive lever, a hook and loop fastener (such as Velcro), a rubber band, and an optional near field communication (NFC) tag. 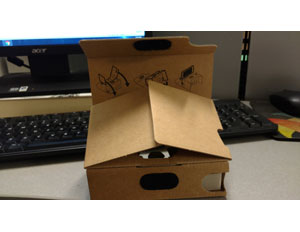 It works with a smartphone. Slide your phone into the Cardboard viewer with the screen facing the lenses. Open a Google Cardboard app on the phone and follow the setup instruction, put the viewer to your eyes. Depending on the app, you control by pushing the magnet on Google Cardboard or by turning your head—the specific app instructs you on what to do.

Once the kit is assembled, a smartphone is inserted in the back of the device and held in place by the selected fastening device. A Google Cardboard—compatible app splits the smartphone display image into two, one for each eye, while also applying barrel distortion to each image to counter pincushion distortion from the lenses; the result is a stereoscopic (“3D”) image with a wide field of view.

How to Get It
Google Cardboard is a device you can build using Google’s free, downloadable template and some additional items you can find at a hardware store or online. The template gets traced onto a piece of cardboard. Additional items needed are two 45 mm focal lenses, magnets, velcro and a rubber band. You can buy the magnets online for $1.03 and a pair of Â lenses for $1.24.

Google has all of the instruction for assembling the device available in a PDF file. If you want to skip assembling your own, there are plenty of pre-made Google Cardboard headsets. Some of them are even made of sturdier, more expensive material than cardboard. Pre-made Google Cardboard headsets generally run about $20-$35), though these fancy viewers from Zeiss, are priced at $120-$129.