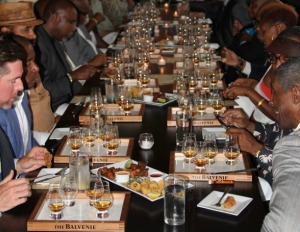 Today marks the start of the third annual Harlem Whiskey Festival, bringing whiskeys from around the world to aficionados uptown.

BlackEnterprise.com spoke with Ron Williams, the entrepreneur behind the festival, to learn about the business behind the spirit:

It was launched in 2007 as a boutique concierge service for professional athletes. “Serving and protecting gifted lifestyles” is our tagline. As a byproduct of our work with athletes we’ve been able to develop tremendous relationships with luxury brands.

When and how did you get into whiskey?

My introduction happened several years ago when my good friend NBA legend Michael Jordan and I shared a bottle of Macallan Single Malt Scotch and a Cuban Cohiba in Toronto.

Why start this festival in Harlem?

I decided to start in Harlem simply because Harlem deserves its own festival. Our objective is to make whiskey hip, fun, cool, sexy, and accessible to women. And to give small batch and craft distilleries an opportunity to reach an underserved audience.

Many people don’t know that there’s a history here, in Harlem.

Harlem actually has a rich history with the spirit, dating back to prohibition. There’s an emerging whiskey movement in Harlem, and we’re at the forefront of it.

This is the third year of the festival. How has it evolved?

We’re super excited about our growth in terms of attendance and brand support. We have whiskeys from around the world, including Japan and India, participating this year. We’ve also added a trade opportunity, so local restaurant and bar owners can come in and meet distillers and brand ambassadors.

The event kicks off with a Craftsmanship Dinner. What makes the honorees special?

Our Craftsmanship Dinner has evolved into an event in and of itself. We’ve assembled an impressive group of honorees this year. Whiskey is about craftsmanship. And our honorees excel at their respective crafts.

You also started a cigar company. How did that come about?

We decided to launch Harlem Cigar Co. because of our passion for cigars and our work with Sensi Cigars Group. We have an ownership stake in Sensi Cigars Group. And we couldn’t think of a better way or platform to introduce their whiskey-infused cigar, which is made in Costa Rica with Cuban tobacco, than during this festival.