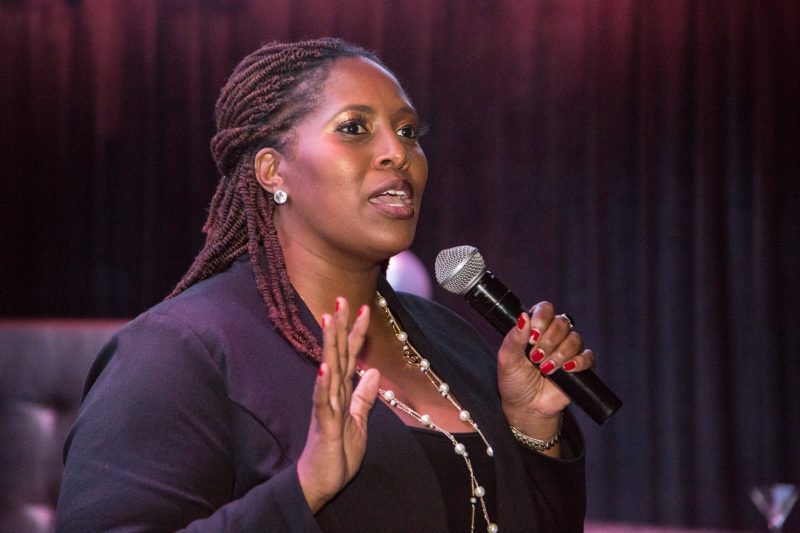 The evening was moderated by former Black Girls Code team member and current Thoughtworks IT consultant and social justice lead, Idalin BobÃ©, who gave us a direct account of her experience as not only a black woman in tech, but also shared snippets of her life as someone from northern Philadelphia.

“I feel as though starting with yourself–pointing out your flaws and who you are–breaks down barriers,â€ said BobÃ©. “When people normally go to networking events, they go with a professional lens. It’s all about your resume, and who you can connect with on a business level, but never on a humanitarian level. I feel as though opening up leads to a much deeper conversation and well-rounded experience for everyone there.â€

This level of depth didn’t stop with BobÃ©; other speakers included Pastor Michael McBride, an MSNBC/CNN activist and the national director Live Free Campaign and PICO Network; Jotaka Eaddy, former NAACP senior advisor, and head of government affairs at LendUp; Tamika D. Mallory, civil rights leader and the co-chair of the Women’s March; and Phaedra Ellis-Lamkins, CEO and board member of Green for All, chief care officer at Honor, and a former music executive that has even worked with Prince.

“I believe that the work that I do is really a tribute to all of the homies in the neighborhood that didn’t make it out,â€ said McBride. “In the [1980s and] 1990s, we all know the crack epidemic really tore our communities up. Many of my loved ones, who got caught up in the streets, are serving life sentences for killings. I don’t know exactly why I made it up, but I thank God for good changes.”

McBride then posed the question, “Will you be a chaplain of the empire or a prophet of the resistance? At the end of the day, we really have a choice.â€

His statements were followed up by Eaddy, who said, “More than anything, I’m just really excited to be among so many change agents, innovators, and real movement builders.â€

Eaddy further elaborated on an infamous quote from Gil Scott Heron, “The revolution will not be televised.”

“He was right,” Eaddy said. “The revolution will not be televised–it will be livestreamed;Â it will be tweeted; it will be [posted on] Instagram; it will be [snapped on] Snapchat; and it will be other things that we are probably building right now, or that we have not even thought of [yet]. I say this to [underscore] that the intersection of technology, movement building, and activism is real. We are at such a pivotal moment in our country where the work that we do, every single day, could not be more important.â€