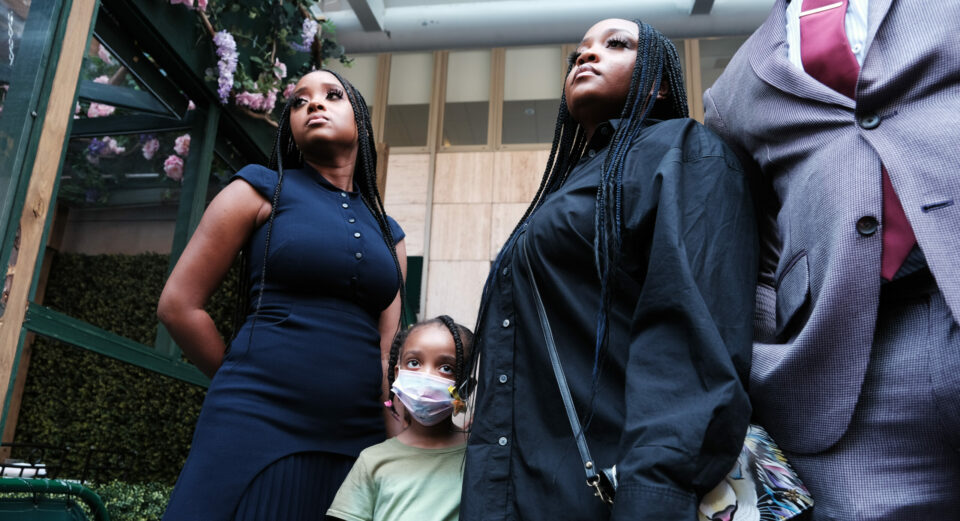 NEW YORK, NEW YORK - JULY 20: Nylah Brown, one of the two young girls who lawyers allege were ignored by a Sesame Place actor dressed as Rosita at Sesame Place in Philadelphia due to their race, stands with her mother, lawyers and community activists at a news conference on July 20, 2022 in New York City. The family has requested that the person dressed as the character be fired and say that the girls have been traumatized by the event. Following a viral video of the event posted on Instagram, the amusement park has since apologized and promised more training for its employees. (Photo by Spencer Platt/Getty Images)

Jodi Brown, the New York mother of a young Black girl whose high-five was ignored by a Sesame Place mascot in July, and her attorney is considering all options after the CEO of SeaWorld Parks & Entertainment, which owns Sesame Place, didn’t uphold his commitment to meet with them.

As The Philadelphia Inquirer reported, the Brown family was expecting to sit down with Marc Swanson for a mediation meeting on Tuesday, Aug. 30. The Brown family continues to express concern that they have not been able to speak with the CEO, even after he promised to “meet them anywhere to hear them out.”

The family’s attorney, B’Ivory LaMarr, said in a statement that an apology from corporate reps and attorneys along with offering sandwiches and cookies is just not good enough.

Following the mid-summer incident, Brown had posted a now-viral video of an employee portraying Muppet Rosita appearing to ignore two young Black girls during a parade. One is Brown’s daughter, Skylar and the other is her niece Nylah, both 6 years old.

The spokesperson for Brown’s family said, on August 11th, Swanson met with Rev. Jesse Jackson and Dr. Todd Yeary of Rainbow PUSH Coalition. Although the Brown family and their attorneys showed up for this meeting, they stood in the lobby for hours and were never allowed to join the meeting.  However, Swanson assured Rev. Jackson and attorneys that he was willing to meet with the Brown family, and attorneys for SeaWorld and Sesame Place asked LaMarr to publicly announce that there would be a mediation scheduled inside of 2 weeks of this meeting.

“While he and his corporate executives sat in comfort in the skyline suite, the Brown family stood in the lobby for hours awaiting word as to whether or not they would be heard,” LaMarr said in the statement.

LaMarr said he and the family directed their concerns to the designated reps, but a mediation has not taken place.

“To appease the Brown family and the community at large, we were presented with the illusion that SeaWorld Entertainment wanted to “do right” and mediate the matter; however, what was labeled a mediation, shifted to a meeting where the Browns were finally able to voice their concerns and then offered a sandwich and cookies,” LaMarr continued, per a statement released by his spokesperson.

This family is not affiliated with the Baltimore lawsuit against Sesame Place.

Now, Lamarr says the Browns are “tired of talking.”

In July, a Black family from Baltimore filed a $25 million discrimination lawsuit against SeaWorld Parks, owner of Sesame Place. The suit claims that Quinton Burns and his five-year-old daughter Kennedi Burns were allegedly ignored during a meet-and-greet event on June 18, BLACK ENTERPRISE previously reported.

“After nearly two months of engagement, it has become evident and we believe that the leadership at SeaWorld Entertainment does not respect the political power of African-American civil rights leaders and their outreach within the community,” LaMarr said in a release, per CBS News. “We further believe that they do not respect the African-American dollars that help make SeaWorld and Sesame Place profitable.”

Sesame Place has since issued multiple apologies. They also required that all employees complete bias training until the end of September 2022, undergo a racial equity assessment, and participate in a developing anti-bias training and education program.

A SeaWorld Parks and Entertainment spokesperson disagreed with the family’s account of event and issued this statement.

“Immediately following the incident, we spoke to Ms. Brown, offered an apology, a refund for her entire party -which she accepted – and invited her family back for a special meet-and-greet experience with the characters. We have remained in regular contact with the Browns through their attorneys.

Separately, Reverend Jesse Jackson wrote a letter to us requesting a meeting with our CEO.  That meeting happened on August 11th and included our CEO. At the press conference that followed, all sides described the meeting as “a day of progress.” In addition, we requested many times to meet with the Browns face-to-face to receive an apology from our Sesame Place park president and other senior executives which happened last week.

Our CEO was never a part of that planned meeting. We continue to advance the commitments we have made which include ensuring that by the end of this month, Sesame Place employees will have participated in a substantive training and education program designed to address bias and promote inclusion so that all guests and employees feel welcome.”

Editor’s note: This story was updated to correct that this family is not the Baltimore family that has a lawsuit against Sesame Place. We also updated to include SeaWorld’s statements.