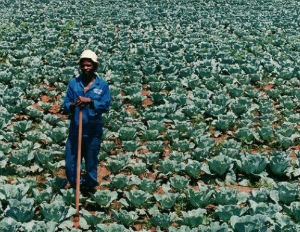 Farmers from the southern region and their supporters recently gathered in front of the Supreme Court building in D.C., demanding justice for what they called an unfair settlement in the landmark Pigford class-action lawsuit. Black farmers claim discrimination by the Department of Agriculture, the “The Last Plantation” continues.

Longstanding Fight With Department of Agriculture

The rally was spurred by the plight of North Carolina farmers Eddie and Dorothy Wise, who were evicted from their foreclosed, 106-acre farm in January by armed federal marshals and several Nash County deputy sheriffs, without ever being granted a hearing. The couple had lived on the farm for more than 20 years. The Wises are challenging what they claim is the USDA’s long standing practice of denying black farmers a formal hearing before the Administrative Law Judge.

In addition, the Wises petitioned the nation’s highest court on 28 U.S.C 2415 that bars all money claims, other than farm ownership. Their argument is that all farm operating loans are bared by this statute for Pigford claimants, and the USDA has been able to circumvent this law in order to take all of the property belonging to affected farmers. The USDA has also been able to circumvent the relative statute to offset money owed to Pigford claimants. The U.S. Supreme Court, upon review, could change these illegal tactics that currently affect over 80,000 socially disadvantage farmers.

According to Slaughter, Congress has expressed its intent to hold a formal hearing on the merits in the 2007 Pigford Remedy Act, which was incorporated in the 2008 Food Energy and Conservation Act or “Farm Bill.” In addition, the group notes that USDA is denying all claims and hearings by Black Farmers, Women Farmers, Hispanic Farmers, and Native American Farmers.

The eviction of the Wises from their farm left the couple landless and ultimately homeless. AÂ  GoFundMe page was made in order to help the Wise family with their expenses. Since the campaign’s creation in January, nearly $6,000 was raised, with a $50,000 goal.

“The time has long expired on the unremitting discrimination and breach of The Pigford Consent Decree,â€ Slaughter says. “Black farmers are continuously denied due process; in particular, a right to have a formal hearing on the merits of their case before the Administrative Law Judge of The USDA.â€