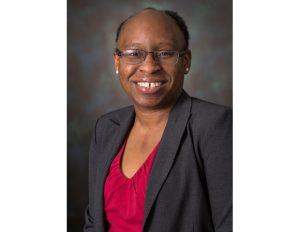 As the supplier manufacturing engineering manager for military aircraft systems at Northrop Grumman, April Fowles “leads team projects and builds fighter jets,â€ according to her biographical information on LinkedIn. Fowles was recently awarded “Outstanding Woman in Technologyâ€ by the National Society of Black Engineers (NSBE). The award “recognizes individuals with a career of exceptional accomplishments in an engineering or technical field, leadership abilities, demonstrated support for increasing the number of women in engineering and technology, and a high level of achievement in technology,â€ reads a statement on Northrop Grumman’sÂ website.

Fowles holds a bachelor’s and master’s degree in Industrial and Systems Engineering from the University of Southern California. She has over a decade of experience in the manufacturing and engineering of military aircraft. In addition to her work, she mentors other engineers, and also speaks to young people about pursuing science, technology, engineering, and mathematics (STEM careers).

The award ceremony took place at the NSBE’s 43rd annual convention, which was held on March 29—April 2, 2017, at the Kansas City Convention Center, in Kansas City, Missouri. The convention is perhaps the largest gathering of black engineering students and professionals. It is an opportunity for them to network, provide support, and mentorship.

This year’s convention also included events for K-12 students, graduate students, and professionals. It also marked the launch of the first-ever ever Chapter Leadership Luncheon, designed for further engagement with professional engineers.

Northrop Grumman is one of the largest defense contractors in the world. The company has aggressively pushed diversity and inclusion initiatives, often in partnership with NSBE. Last year, NSBE received a $2 million grantÂ from the Northrop Grumman Foundation. The program, officially named the Northrop Grumman Corporation/NBSE Integrated Pipeline Program, provides 72 engineering students with $8,000 in scholarship grants. Those students also received internships at Northop Grumman as well as year-round academic and career development support.