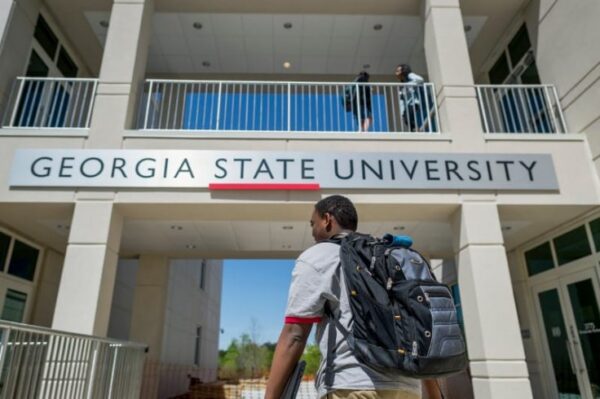 A Georgia State University student took her concerns to TikTok after a Black college professor called the campus police on two Black classmates for arriving to class late at Perimeter College.

College student Bria Blake puts the professor on blast and further explains the incident in a TikTok video on Wednesday, March 30. As of Monday, April 4, the video has reached over 159,000 likes and more than 5,000 comments expressing outrage over the incident.

In the video, Blake identifies the professor as Carissa Gray, whom she recalls asking two of Blake’s classmates, Taylor and Kamryn, to leave after they showed up to the English class just two minutes late. According to Blake, Taylor said that they, as students, “paid to be here” and refused to leave. The professor then left the room and brought back with her two “armed” police officers, who threatened to charge the students with trespassing if they did not leave the classroom, Blake said.

Blake recalls that the police allegedly tried to forcibly remove the students by holding onto Taylor’s belongings until they agreed to leave.

In a statement, Georgia State University said it is “looking into this matter and how it was handled by the faculty member,” according to NBC News.

“Campus police arrived after being called by the faculty member and immediately de-escalated the situation between the students and faculty member, the school continued, “Clearly, no crime had been committed, so there were no arrests.”

As per Blake, when the students filed a complaint with the campus Student Life department, they were informed that police had been called on students for “something irrational” before. Both students wept in fear of not knowing what could happen to them due to the incident.

The University’s student code of conduct states that an instructor is allowed to call for campus police to remove a student whose behavior “poses an immediate threat to the safety” of themself, the instructor, or other students, as per the news outlet.

However, according to a Georgia State University representative, it is abnormal for faculty to summon the campus police over tardiness or other disrespectful behavior. In fact, the policy is meant to help de-escalate any extreme behavior.“

“Time and time again, we’ve seen the police being weaponized against Black people,” Blake said in the video. “Calling the police on two students for being two minutes late to class is extremely unreasonable and dangerous.”