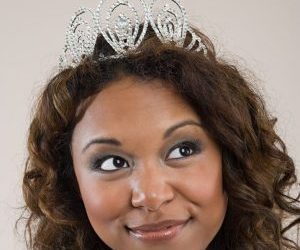 Beauty pageants are more than just winning a crown and sash. It is big business, and it provides several lucrative opportunities for the winners and its contestants. Many contestants have found considerable success in various professions, including entertainment (Halle Berry), journalism (Oprah Winfrey), and politics (Erika Harold). As great as the possibilities are, there are not enough African American women competing for the title.

Several factors could be preventing more African American women from competing, such as finances, awareness, or confidence. Numerous reports have documented that it is expensive to compete in pageants. Similar reports point out that black girls are not introduced to the idea, or are convinced it is not something they can achieve.

More African Americans should definitely participate, Â but I do think they must first understand the mainstream pageant culture, which is different from minority-based pageants. There is a vast array of untapped resources and opportunities that African American girls and women are not privy to, only because they are not in the pageant community. “Participating in pageants not only places you in that community, but can literally place you in front of the one person needed to change your life,â€ says Kola Brown, a former Miss Arkansas International and Miss Arkansas finalist.

In comparison, the Miss USA pageant started in 1952, crowning its first winning woman of color, anÂ Asian American, in 1962. Over two decades later, the first Latina woman was crowned, with at least six more named Miss USA since. It was not until 1990 that the first African American woman, Carole Gist, was crowned. Eight more black women, including Real Housewives of Atlanta star Kenya Moore, have been crowned since then. The number of girls of color named Miss Teen USA mirror those of the aforementioned; a total of eight women of color have won the teen pageant, with at least five identifying as African American.

Arguably, pageants have come a long way from the days when women of color were prohibited from participating. However, with less than 10 black winners in each major national pageant, there’s still the need for growth, diversity, and inclusivity.

“I think pageants can be so empowering. You see throughout history that African American women were put down, and told they were not good enough, pretty enough, or were not worthy. It is empowering to see a woman of color be able to stand up and represent. There are so many times including now, where women of color have been belittled and oppressed. I think as more and more African American women enter pageants, we are going to see more and more African American girls realize their worth and how much they can achieve,â€ says Ashley Ehrhart, Miss Arkansas Delta 2017.

Ehrhart is a sophomore at Arkansas State University, majoring in psychology. She will be competing this year for the title of Miss Arkansas, and hopefully Miss America. She received a $2,000 scholarship for winning her local, preliminary title. The college student represents a new wave of young African American women tapping into the resources that pageant’s offer.

In the current societal and economic climate, beauty pageants provide an opportunity for young women to attend college without accumulating a lot of loans. College data shows the national average tuition is 30,000 for private colleges and 9,000 for in-state public universities. The average class of 2016 graduate owes over $37,000 in student loans,Â according to Student Loan Hero. Statistics also show that the average college student does not attend college on an academic or athletic scholarship. Facts such as these are another incentive for African American girls to consider competing in pageants.

Ehrhart could win $25,000 if she wins her state title, and $50,000 if she wins the national crown. The runner-ups receive roughly half of what the winner is awarded, and non-finalists take home at least $3,000. With those odds, all the contestants walk away with a brighter future. The money can be used to not only pay for tuition, but payback loans and set up promising lifestyles.

These competitions also allow young women to promote a platform, build confidence, fine-tune communication skills, cultivate friendships among women from varying backgrounds and cultures. They also provide networking and potential job opportunities, as well as other key things that look good on a rÃ©sumÃ© and can open doors to endless possibilities.

“Pageant contestants have to be smart, intelligent, relatable, charismatic, and patient. These are just overall well-rounded women. It is not just women who stand in front of a mirror and put on makeup, and do their hair; it’s women who put in time and effort, and truly want to make a difference,â€ Ehrhart says.

Mission statements on most pageant organization websites indicate that the contestants give their home state or hometown someone to be proud of and root for. The comradery that pageants bring is another direct indication of why having minorityÂ representation is vital.

As the movie Hidden Figures has inspired more black girls to go into STEM fields, hopefully reigning Miss USAÂ Deshauna Barber, who is also an active military member, will inspire a new generation of young girls to compete for the coveted crown, and help shape the public perception of what beauty, brains, and brawn look like.

This article was written by BLACK ENTERPRISE contributor Chalise Macklin.