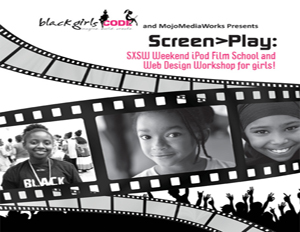 Black Girls Code and MOJO MediaWorks partner to offer a weekend of mobile and web-based training at this yearâ€™s SXSW festival (Image: Source)

It’s not every day that teens get a front row center view of one of the largest conferences and festivals in the United States. While some teens are reading up on South by Southwest (SXSW), which takes place annually in Austin, Texas, in the newspaper, online and, most likely, through their Facebook newsfeed, Twitter stream or Instagram feed, five African-American girls from Austin were selected to become the newsmakers during a portion of the 10-day extravaganza.

It’s an opportunity that Kimberly Bryant, founder and CEO of Black Girls Code, and Allissa Richardson of MOJO MediaWorks wanted the young innovators to add to their resumes. The duo put their heads together and developed “Screen>Play: A Weekend iPod Film School and Web Design Workshop,â€ an initiative that merges the top two trends in educational technology: mobile learning and web coding.

On March 8-9, the young women were charged with answering the question, “Why should Black girls code?â€ through iPods and iPads provided by MOJO MediaWorks. They shot hours of footage from the panel discussions and one-on-one interviews with the who’s who of Black digerati like Kathryn Finney of Digital UnDivided, Dr. Mae Jemison, the first African American woman to venture into space; professor, author and host of her self-titled weekend show on MSNBC Melissa Harris-Perry, and Bryant. For the web design portion of the workshop, Ballet Austin, their local partner, donated its computer lab.

“Black Girls Code’s partnership with Mojo MediaWorks at SXSW is a tremendous opportunity to expose girls of color to the technology space during one of the biggest tech events of the year,â€ said Bryant, who was awarded the Top 10 Tech Innovator of 2012 award by Blacks in Technology during the SXSW Interactive festival. “We hope that this pilot will expand to other tech conferences and allow girls of color in many cities to develop tech skills and interact with changemakers in the industry.â€

At the close of the workshop day, on Saturday evening, the group hosted a film screening where the girls debuted their work.

While this is a pilot program, both Bryant and Richardson, who is an Apple, Inc. Distinguished Educator, are invested in making this a long-term program, expanding to other major tech conferences in the near future.

“I tell the college students that I teach everyday at Bowie State University that we have to become media creators and not just consumers. That way, we get to highlight our communities and share our histories,â€ said Richardson.

To watch the projects created during the weekend of mobile- and Web-based training, visit www.mojomediaworks.com and www.blackgirlscode.com .