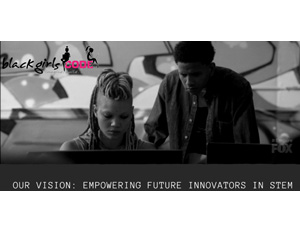 With its focus on introducing black girls to the technology industry and the world of coding, it’s fitting that the organization Black Girls Code was featured on one of the most watched TV shows, which showcases a powerful, black female lead, Empire.

Founded by Kimberly Bryant, an electrical engineer, in 2011, Black Girls Code educatesÂ adolescentÂ girls of color about technology and programming. Black Girls Code holds a series of workshops and labs across the country, as well as regular hackathons–coding marathons that allow the young women to hone their coding skills.

Bryant has enlisted the assistance of powerful partners, including Google, to fulfill the Black Girls Code mission. Earlier this year, Black Girls Code and Google led a day-long workshop, in which girls ranging in age from seven to 17 were taught how to build a computer game. This workshop took place at Google’s Chelsea Market headquarters., and the girls were taught how to build a game using the programming language, Scratch.

In 2014, Toyota awarded $25,000 to Bryant for Black Girls Code. The grant was presented during Oprah Winfrey’s The Life You Want Weekend tour, where Bryant was honored for her work.

In the scene fromÂ Empire, Cookie asks Dubois what Black Girls Code is all about, to which he replies, “This is the future–this, right here. This is how we rise.â€

The Black Girls Code Twitter account thanked followers and other Twitter users, including Vivica A. Fox, for the congratulatory response they received, after being mentioned on the show. The account also advised that those interested in supporting Black Girls Code can help by shopping at its online store and by donatingÂ to the organization.